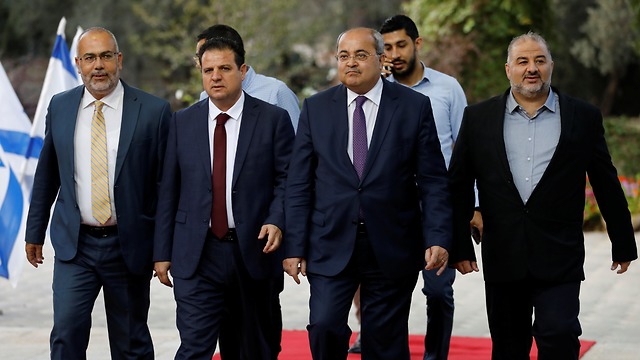 The alliance of Israel's biggest Arab parties submit a letter to President Rivlin, clarifying their backing of Blue and White leader to form government doesn't include the 3 members of the far-left Balad party, putting the center-left bloc's seats at 54, one less than PM's 55

The alliance of Israel's biggest Arab parties, the Joint List, said their backing of Blue and White leader Benny Gantz to form a new government was not a unanimous decision with three of the faction’s members opposing the recommendation to the president. This puts Gantz’s center-left bloc at only 54 seats, one less than what Prime Minister Benjamin Netanyahu’s bloc is expected to receive.

The Joint List moved on Sunday to back the center-left bloc of Gantz, who is challenging Netanyahu’s right-wing alliance, to form a coalition. Thus, end the party’s usual policy of withholding support for any candidate.

Initially the Arab party’s backing gave Gantz’s bloc 57 seats, putting him in the lead over the 55 seats the right-wing bloc is expected to gain. However, in a letter submitted to President Reuven Rivlin on Monday, the Joint List said their recommendation does not include members of the far-left Balad party - which is part of the Joint List - which strongly opposed the backing of Gantz.

"President Rivlin, I would like to inform you that the three Balad MKs have asked me, as the chairman of the faction, to clarify that the Joint List backing of Benny Gantz does not include them,” wrote the Joint List leader, Ahmad Tibi in the letter. “Therefore, the recommendation is on behalf of ten MKs … and not 13.”

The representatives of the Balad party, headed by MK Jamal Zahalka, did not attend the meeting with the president on Sunday evening, issuing a statement shortly after.

“Balad opposes the recommendation of Lt.-Gen. (res.) Benny Gantz,” said the party in a statement. “Balad members made it clear during a meeting of the Joint List faction that no candidate should be backed by the party.”

“Gantz should not be recommended due to his right-wing political stance, which is not too different from Likud, as well as for his bloody and aggressive military history.”

The statement went on to suggest that Gantz intends to eventually form a unity government with Likud and Avigdor Liberman’s Yisrael Beytenu, which in Balad’s opinion would be “worse than a right-wing government,” adding that Blue and White has so far failed to commit to any of the demands put forward by the Joint List.

Gantz has so far rebuffed Netanyahu’s calls to join a unity government.

Near-final results of the September 17 elections show Blue and White will be the largest single party in the new parliament with 33 of the 120 Knesset seats, while Likud has won 31 seats, three less than it had before.