Game over: A DNA test on Osama bin Laden's body showed a "virtually 100%" match against the arch-terrorist's relatives, a US intelligence official said Monday following the United States' targeted killing of the al-Qaeda leader.

Following the firefight at bin Laden's Pakistan hideout, the US used "multiple methods" to positively identify his remains, according to a senior Pentagon official who personally saw a photograph of the corpse.

The officials did not immediately say where or how the testing was done but the test explains why President Barack Obama was confident to announce the death to the world Sunday night. Obama provided no details on the identification process.

ABC released a video of the Pakistani location shortly after the targeted killing, revealing a blood filled room, broken furniture and destroyed computers – without their hard drives.

The US is believed to have collected DNA samples from bin Laden family members in the years since the September 11, 2001 attacks that triggered the US-led invasion of Afghanistan.

US officials also said bin Laden was identified through "facial recognition," a reference to technology for mapping unique facial characteristics, but it was not clear exactly how the Navy SEAL troops performed the comparison.

Bin Laden was shot in the head during the firefight with members of an elite American counter-terrorism unit that launched a helicopter-borne raid on the al-Qaeda leader's compound in Pakistan early Monday, US officials said. 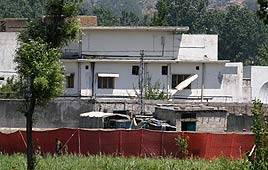 According to officials, Special Forces who stormed the compound came face to face with bin Laden.

A US official said the arch-terrorist went down firing at the Navy SEALs who stormed his compound. An official familiar with the operation said bin Laden was hit by a barrage of carefully aimed return fire.

The official spoke on condition of anonymity because aspects of the operation remain classified. He said two dozen SEALs in night-vision goggles dropped into the high-walled compound in Pakistan by sliding down ropes from Chinook helicopters in the overnight raid.

US officials say bin Laden was killed near the end of the 40-minute raid.

The SEALs retrieved bin Laden's body and turned the remaining detainees over to Pakistani authorities.

'This was a kill operation'

US officials say CIA interrogators in secret overseas prisons developed the first strands of information that ultimately led to the killing of Osama bin Laden.

The Pentagon said bin Laden's body was placed into the waters of the North Arabian Sea after adhering to traditional Islamic procedures - including washing the corpse - aboard the aircraft carrier USS Carl Vinson.

At a briefing for reporters at the Pentagon, a senior intelligence official who spoke on condition of anonymity under ground rules set by the Pentagon, said a woman believed to be bin Laden's wife identified him by name during the raid that killed him.

The US Special Forces team that hunted down Osama bin Laden was under orders to kill the al-Qaeda mastermind, not capture him, a US national security official told Reuters.

"This was a kill operation," the official said, making clear there was no desire to try to capture bin Laden alive in Pakistan.