Cairo's interim cabinet decides to withdraw its envoy to Israel over troops' death near border Thursday; Jerusalem's ambassador to Egypt summoned by authorities

Israel-Egypt ties rattled further: Egypt has decided to recall its ambassador, Yasser Reda, from Israel in protest of the deaths of five Egyptian security forces in a border incident which took place Thursday, Cairo's state TV reported on Saturday.

The Egyptian troops were killed as Israeli soldiers pursued suspected terrorists from the Gaza Strip, who crossed the border from the Sinai Peninsula into southern Israel and carried out multiple terror attacks, which left eight Israelis dead and dozens injured.

There nature of the incident is still under investigation, but the Egyptian interim cabinet has already ruled that "Israel is politically and legally responsible for this incident"; further stating that is was in breach of the 1979 peace treaty between the two countries.

"The Cabinet committee has decided to withdraw the Egyptian ambassador in Israel until the result of investigations by the Israeli authorities is provided, and an apology from the Israeli leadership over the hasty and regrettable statements about Egypt is given.

"Egypt deplores the irresponsible and hasty statements made by some leaders in Israel, which lack the wisdom and prudence and passes judgment before arriving at the truth, particularly keeping in mind the sensitivity of Egyptian-Israeli relations," the cabinet's statement said.

Egypt has also summoned the Israeli ambassador in Cairo to protest the shooting. A cabinet statement carried by Egypt's state TV said: "The Cabinet assigns the Egyptian foreign minister to summon the Israeli ambassador in Cairo. The cabinet demands a joint official probe to ascertain the circumstances of the incident… and take the necessary legal action to protect the rights of Egyptian victims and injured."

The troops' death has posed a major test for ties between Israel and Egypt following the uprising that ousted President Hosni Mubarak and strengthened forces hostile to Israel.

Jerusalem expressed concern about security in the Sinai peninsula and said that the terrorists responsible for Thursday's attacks had infiltrated Israel from Gaza via Egypt's Sinai desert, despite stepped-up efforts by Egyptian security to root out Islamist radicals.

Cairo has adamantly rejected the criticism, which essentially suggested it has lost control of Sinai, and its strong-language statement, added that Israel was to blame, since the "lax security" from its side had allowed the ambush to take place. 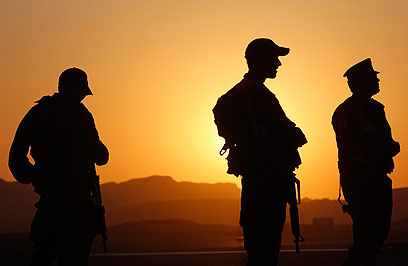 An earlier Egyptian statement accused Israel of trying to "shirk responsibility for the recklessness of Israeli security forces in protecting the borders."

This was the first time in nearly 11 years that Egypt decided to recall its ambassador from Israel. The last time was in November 2000 when the Egyptians protested what they called excessive use of violence during the al-Aqsa Intifada.

"Israel sees its treaty with Egypt as a strategic and fundamental element of existence in the Middle East and had no intention of harming any of its security personnel in the border incident, which is still under investigation," a senior defense official said on Saturday.

Ynet learned that the Foreign Ministry has called a consultation following Egypt's decision to recall its ambassador. The ministry said that the decision was "regrettable" and that Israel seeks to maintain its close ties with Egypt.

A ministry source said that Israel has no intention of recalling its ambassador to Cairo as this time, "as that would indicate downgrading the (diplomatic) relations. We have no desire to see that happen – on the contrary."

The source added that "the decision weather to recall the Israeli ambassador is, ultimately, Prime Minister Benjamin Netanyahu and the security cabinet's to make. At this point, a consultation on the matter has been called with the Prime Minister's Office, the Defense Ministry, the Foreign Ministry and the National Security Council."

The source stressed that Israel strives to resolve the issue before Ambassador Reda leaves.

Ronen Medzini, AP and Reuters contributed to this report