Shalom addressed the escalation in the south during a visit to Soroka University Medical Center in Beersheba, where he looked in on those wounded in Saturday's barrage: "The deterrence of has exhausted itself. We'll need to respond, and we're not ruling out the possibility of a ground operation," he said.

"We cannot abide this situation, where a million Israelis are under the costant threat of rocket fire."

Members of the Knesset's Defense and Foreign Affairs Committee also toured the area on Sunday. Committee chairman and former IDF chief Shaul Mofaz (Kadima) said that "Israel must decide – will we continue with this intolerable reality of a war of attrition, or will we strive for an unequivocal decision with regards to Hamas, including targeting its leaders and infrastructure, with aim of toppling its reign in Gaza.

"Any decision made by the government with aim of rehabilitating the State of Israel's power of deterrence vis-à-vis Hamas, which has dissipated over the past few years, will be approved by the Knesset," Mofaz said.

"It's not right that over one million citizens cannot go about their normal lives. We must change this equation, where Hamas tells us what to do, because this past week's terror attacks are some of the worst the State of Israel has ever known." 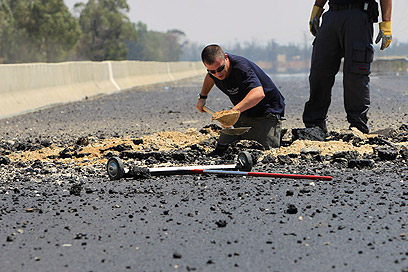 Be'er Tuvia's Regional Council Head Dror Shor attended the meeting as well, noting that the have been preparing for the upcoming school year opening next week, wondering whether it would be wise to open the schools given the recent escalation. "Some of the communities put up portable shelters independently. It's not a bad idea, securing 30 to 40 people," he said.

"It's pretty frustrating to know that we have deterrence equipment such as Iron Dome – but that getting supplies is a matter of budget," said Committee member MK Avi Dichter.

Kiryat Malachi Mayor Motti Malka informed committee members that there are many factories surrounding his city, containing tons of hazardous materials which he said could cause a catastrophe should they be hit by a rocket.

MK Meir Sheetrit noted that "once a battery will be placed, it will lesson the anxiety of the public. Changes must be made in the State's priorities."

Dichter added that authority heads must place portable shelters in the streets, explaining it's not a very complicated or expensive thing to do. "It's frustrating to see children in schools where the have no place to run, hiding under tables. It's embarrassing. Eventually we'll have to look them in the eyes."