Gaza groups out to challenge Hamas?

Is Hamas losing its grip on Gaza Strip? Hamas was quick shrug off any blame for the relentless rocket fire which has been plaguing Israel's south since Thursday, indicating further that an escalation vis-à-vis Israel is not in its interest. But is it possible the organization is simply unable to rein in the Strip's militants?

Islamic Jihad and the Popular Resistance Committees (PRC), as well as dozens of smaller splinter groups based in Gaza, have a vested interest in seeing the security situation deteriorate; be it in order to increase their footing in Gaza, appease their Iranian or Syrian puppet-masters, or simply to embarrass Hamas.

Thursday's series of deadly terror attacks was carried out by the PRC – Gaza's third-largest militant group, which is comprised of several hundred operatives. The Popular Resistance Committees came into existence as a Fatah splinter group, but soon became much more radical. The PRC notorious for its eagerness to inflict terror on Israel and has carried out some of the gravest terror attacks against Israel in the past decade. The PRC claimed responsibility for the majority of the weekend's rocket attacks, saying they came in retaliation for the killing of Samad Abdul-Mati – a top PRC commander – by the IDF. The PRC's zeal is shared by Islamic Jihad, and several other groups. The Islamic Jihad oppose any armistice with Israel and relish any opportunity to destabilize Hamas' authority in general, and particularly over the smaller militant groups in the Strip, which enable Gaza's rulers – as the Islamic Jihad perceives it – to tie their hands. 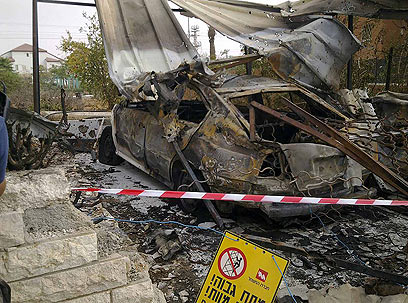 The Islamic Jihad, which is backed by Iran, also enjoys plainly embarrassing Hamas in the diplomatic area, and knows any rocket fire will be held against "Gaza's bosses."

The desire to embarrass Hamas is shared by the al-Aqsa Martyrs' Brigades – Fatah's military wing, and other radical Islamist groups, some of which are affiliated with al-Qaeda, who believe that Hamas has abandoned the "true way of resistance," in favor of a more moderate doctrine. These radical groups have no interest is achieving or maintaining a ceasefire with Israel, and boast recruiting occasional Hamas members, who they say have tired from Hamas's attempt to become the "second Palestinian Authority." Analysts believe that the few rockets Hamas operatives did fire over the weekend were mainly to assert is standing among the Gaza groups, and not as means of further deteriorating the situation in southern Israel. Hamas, they added, allowed the Strip's groups to "blow off some steam," but faced with Israel's mounting military response, it is quickly losing patience with the broad license they have taken and is now looking to assert its control over them once more.