Gunned down Islamic Jihad opeartive involved in attacks near Eilat

IAF targets car of local group leader in Rafah, who, according to defense officials, was in charge of the funding of the attack that left eight Israelis dead

An Islamic Jihad operative was killed in a car explosion in the Gaza Strip late Wednesday that Palestinians said was the result of an Israeli air strike. The IDF confirmed the report.

According to military sources, the operative was responsible for the funding of the terrorist attack near Eilat last week, in which eight Israelis were killed. In addition, he was defined as a 'ticking bomb' since he was involved in planning other attacks in the south.

The Islamic Jihad identified the man as a local leader in the southern Gaza city of Rafah. A spokesman for a medical service run by Hamas said two other people were wounded after the car was targeted by Israeli aircraft. 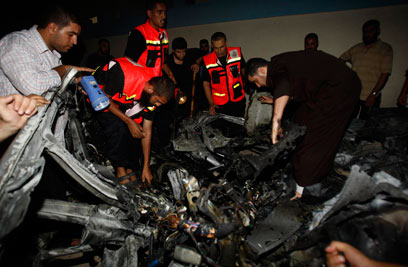 Meanwhile, IDF Chief of Staff Benny Gantz on Wednesday ordered the army to step up its defenses across Israel's border with Egypt and allocated more resources to the Eilat command center following last week's attack.

The decision means that the sector will receive higher preference, among other things in the allocation of funds and manpower.

The IDF Spokesperson' Office said that the terrorist "was involved in smuggling weapons and sought to advance military operations in Sinai." The army added that "lately there have been several attempts by Gaza terrorists to carry out attacks in Sinai and that was what this operative was involved in."

Several hours after the strike, two mortar shells exploded in the Western Negev causing no injuries or damage.

The offensive prompted a senior member of the organization in Gaza, Ahmad al-Mudallal, to threaten retaliation and declare that "this crime was meant to underline that Israel only understands the language of blood and terror."

"We will take action against the enemy in a language that it understands, the language of blood," he added. "We will not ignore the crimes it commits against our people."

Also overnight, an IAF jet targeted two terrorists in Gaza after they were spotted attempting to fire rockets at southern Israel from two different locations.

Residents of the Gaza vicinity communities, meanwhlie, were once again asked to remain within a range of 15 seconds from a fortified compound. The pervious directives, which were announced after the cease-fire with the Palestinian factions in Gaza had been reached, have been cancelled.

Israel and Palestinian factions in Gaza had agreed to a ceasefire on Monday, officials said, after five days of intense cross-border violence.

Reuters and Ilana Curiel contributed to the report