Social protestors back on the streets: Thousands of people were expected to hit the streets nationwide for a series of rallies to protest the skyrocketing cost of living and demand social justice.

In Tel Aviv, some 15,000 protestors gathered for a march and rally, marking a sharp decline from attendance figures in previous protests. The protestors included Gilad Shalit campaign activists; the abducted IDF soldier being held in Gaza will be turning 25 Sunday and his father, Noam spoke at the rally.

"My family and I are amazed at the wonderful protest spread all across the country, with hundreds of thousands of residents pleading (for the government) to listen to them," Noam Shalit said. "Social justice is also restoring the values that generations of fighters were educated by – we do not leave IDF soldiers behind."

"Did our leaders forget these values? Camaraderie, mutual guarantee – are they planning to privatize these values as well?" he said. 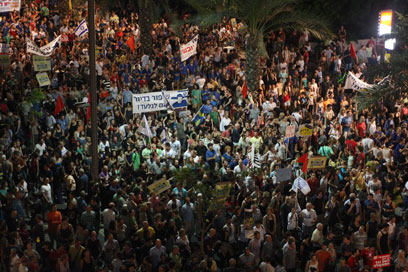 Other speakers at the event were to include housing protest leader Daphni Leef and Student Union Chairman Itzik Shmuli. Several performers were also set to appear at the rally.

In his speech, Shmuli referred to Shalit, saying that "one protestor who could have been a student today is still missing here."

Addressing Prime Minister Benjamin Netanyahu, the student leader said, "Let us make a living in this country," demanding a dramatic change in government priorities and warning the PM that the protest wave will not be waning: "The protest won't end. The million-man march is already on its way. We shall not stop until we see real solutions here." 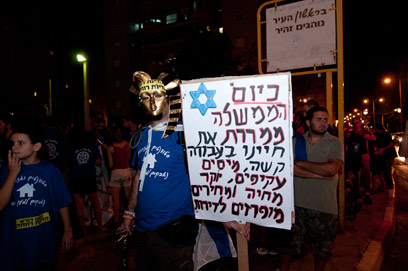 In Jerusalem, some 2,000 protestors gathered Saturday evening ahead of a rally near the Prime Minister's Residence. The activists marched while chanting "Look who's coming -  the welfare state" and "Bibi owns three apartments."

In Rishon LeZion, south of Tel Aviv, some 5,000 people were marching towards the municipal park, where several artists were scheduled to perform. The performance was expected to draw up to 10,000 people, organizers said.

Finally, hundreds of Jews and Arab protestors were marching in the Wadi Ara area in northern Israel. In addition to their demands for social justice, the protestors urged the government not to bring large number of haredim into the area as not to change its social fabric.

Arabs and Jews also protested alongside each other in Jaffa, just south of Tel Aviv.

Other rallies and marches are being held in Petach Tikva, the Bikat Ono region and Katzrin, on the Golan Heights. Attila Somfalvi, Yoav Malka, Ronen Medzini, Hasan Shaalan and Stav Spivak contributed to the story