Hundreds of protesters marched in Tel Aviv on Tuesday night, against the working conditions of HR contractors' employees.

The protesters marched under the banner of "HR contractors are like organized crime," and demanded the contractors hiring system be abolished.

The march ended with a small rally held in Rothschild Boulevard. Protesters were waving signs reading "Power to employees," "Revolution is the answer to privatization" and "We refuse to be used."

Tal Barahav, of the Student Union for Social Justice, told Ynet that "We can't ignore the bigger picture. It's the protest's continuity that will bring about change." 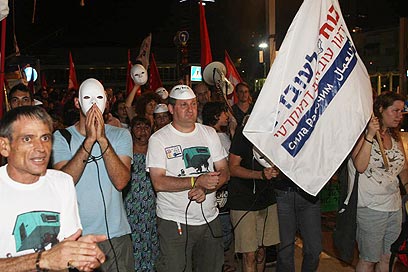 Power to the people. The march (Photo: Moti Kimchi)

Another activist added that the formation of new workers unions is the "key to the revolution," adding that social change is impossible without guaranteeing better working conditions for all sectors.

"Those employed by HR contractors, who are devoid of their social and pension rights will be the next to fall below the poverty line," Barahav said. "The people are taking to the streets because they refused to continue to be used." Tuesday's march, he promised, is the first of many. "We hope to see a change in the system. We're not interested in a superficial fix. We want this system gone."