IDF forces stationed in the southern sector and on the Israel-Egypt border remained on high alert Monday night, as military intelligence indicated a viable terror threat in the area.

The southern sector, and especially the area adjacent to the border, has been virtually flooded with military forces, deployed in a manner defined by one security source as "unprecedented." Related stories:

"We have to get used to the fact that there is a new threat here and it demands attention. We won't be taking any chances," a military source told Ynet.

The IDF has also deployed advanced technology in the area in order to thwart terror attacks. The operational premise, a security source said, is that while work on the Israel-Egypt border fence is in progress, and pending its completion sometime in 2012, the sector will require vigilant attention.

Earlier Monday, and following information suggesting an Islamic Jihad cell posed an imminent threat in the area, IDF Chief of Staff Lt.-Gen Benny Gantz ordered a reinforcement of military presence in the sector. 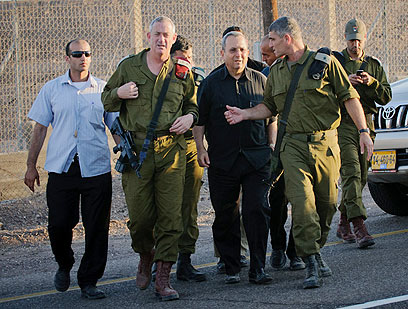 IDF Chief Gantz and Defense Minister Barak touring the Israel-Egypt border (Photo: Ben Kelmer)
Military intelligence suggests that the terror cell has left the Gaza Strip and intends to infiltrate Israel through Sinai – just as the cell that perpetrated the series of terror attacks near Eilat in mid August had done. "The terror groups understand the difficulties in executing attacks in Israel directly from Gaza, they are now directing their effort to Sinai," a military source explained.

As for closing off some of the area's highways – routes 10 and 12 were closed immediately after the Eilat attack and have remained so – military sources said that such decisions were being evaluated on a daily basis: "We're looking for ways to minimize such action, but as long as there is a viable threat we will not allow any travel on these roads."

Ynet's sources said that Hamas would like to avoid any further escalation vis-à-vis Israel and is unlikely to facilitate such a terror attack.

Israel is also still trying to smooth Egypt's feathers in the wake of the Eilat terror attack, which also resulted in the deaths of five Egyptian troops – an incident Cairo is holding Israel responsible for.

"The situation is sensitive on several levels. We have concrete intelligence but we also have to maintain the proper relations with Egypt. This situation requires sensitivity and determination alike," Ynet was told.

Nevertheless, Jerusalem has used diplomatic channels to clarify that its policy of relative restraint – exercised during the last round of violence in the south – will make way for a harsher response should additional terror attacks ensue.