Southern Israel faces major rocket offensive: At least one man was killed and four others sustained serious wounds, including a woman in grave condition, after rockets fired from the Gaza Strip hit the southern town of Beersheba Saturday evening.

Local residents said the Iron Dome anti-missile system intercepted some of the rockets fired at the city in Saturday's salvo. The Popular Resistance Committees claimed responsibility for the deadly barrage.

Meanwhile, a baby and child were among the wounded in the southern town of Ofakim, also hit by Gaza rockets.

The man killed in the Beersheba attack was identified as Yossi Shushan, 38, of Ofakim. Shushan was on his way to pick up his wife, who is nine months pregnant, from her brother's home in Beersheba, when the air raid siren sounded. He got out of his car and suffered a fatal injury to his head.

Around 9 pm, numerous rocket hits were reported across the south, including a direct hit on a Beersheba home. Rescue services rushed to the scene immediately after the report. A vehicle was also hit in the city and caught fire.

Officials said a total of 8 people were hurt in the attack while 26 others suffered anxiety. Beersheba's Soroka hospital opened a hotline following the deadly attack at: 1255-177.

Soroka Medical Center Director Miki Saraf said one victim was dead upon arrival at the hospital. Another woman was gravely wounded, he said.

"We hope that her condition will improve; we are cautiously optimistic," he said, adding that dozens of people were treated for anxiety attacks.

Saraf said that a multi-casualty emergency was declared and all of the hospital's staff was therefore on hand.

Dudu Kadosh, who treated one of the wounded whose leg was severed, recounted the moments of horror: "There was a siren and we heard some faint explosions. We ran to the house nearby and saw two people lying on the road, one with his leg hanging by the bone, with the flesh exposed. I almost fainted," he said.

"My son tried come inside but was injured, his legs were hurt," said the mother of one of the wounded. "I'm afraid; he was lying there and not speaking. I ran to get him some gauze to make a tourniquet." 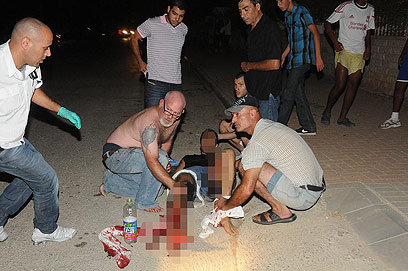 One of the neighbors said two of the wounded were hurt while attempting to find shelter. "The two were running to get into the house and find shelter but the missile got them. My son went to help one of them; he's traumatized."

Magen David Adom's Negev Region Director Itzik Alfasi said most of those wounded in the blast sustained shrapnel injuries. "This is an opportunity to stress that the moment the Color Red alert is activated, people should remain in shelters for at least 10 minutes."

An initial investigation revealed that the wounded were all outside the shelters when the rockets hit.

Earlier in the evening, a four-month-old baby was wounded after a rocket fired from Gaza hit a home in the southern Israel town of Ofakim, Magen David Adom emergency services officials said.

An eight-year-old girl and a 20-year-old man were also hurt in the attack, officials said. According to initial reports, all three casualties sustained light wounds and were taken to Soroka Medical Hospital in Beersheba for treatment.

Hamas, which early Saturday announced that it is no longer committed to a truce with Israel, claimed responsibility for the attack. However, the group later recanted its statement. 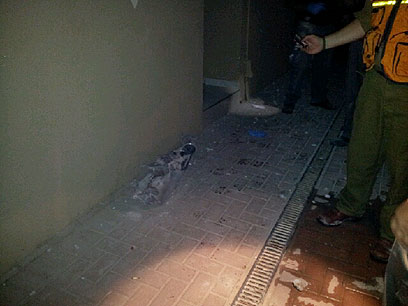 Neighborhood resident Dvir Ben Simon told Ynet: "At first I saw a spark and then I heard a loud bang that shook the entire neighborhood…the rocket landed in my neighbor's backyard."

Another neighbor, Tzvika Lankry, said the missile hit the house directly but apparently did not explode.

"The entire house was destroyed," he said. "I heard the siren, looked out the window and saw the rocket landing."

The Popular Resistance Committees claimed responsibility for the attack, saying they fired two rockets at Beersheba and one more at Ashkelon. The attack followed rocket and mortar barrages directed at southern Israel throughout the day by Gaza terrorists. At least 13 mortar shells were fired at Israel in the afternoon and evening hours, mostly landing in open areas and causing no injuries.

However, some damage was reported after one shell landed inside a local community.

Earlier Saturday, 11 people were wounded as result of the rocket fire. Eight of them were injured in Beersheba, while three Palestinian illegal aliens were hurt near Ashdod, one of them seriously. After being informed of the attack, the mother of one of the wounded Palestinians said: "The missile has no eyes, and it never knows whether it will hit Muhammad or Shlomo." With rocket attacks on Israel escalating, IDF Colonel Doron Mor Yosef, the head of the Home Front branch's southern district, briefed journalists and stressed the army's instructions for local citizens. While shopping centers and places of employment will operate normally, summer camps and studies will only be held at reinforced facilities or at sites close to secured roomed.

Referring to housing protestors staying in tent cities, Mor Yosef said that they have been asked not to gather at one site and remain close to shelters.

Meanwhile, following a situation assessment headed by Police Commissioner Yohanan Danino, the Israel police decided to keep its alert level at 3 – one level bellow the highest. Bolstered police forces are to secure the south and the Jerusalem area, as well as major highways and highly populated areas. Authorities urged the public to follow orders doled out by Home Front Command, and refrain from gather in large crowds.

Police Chief Danino made his way to the south following the meeting.