Egypt's military has began an operation to close a network of smuggling tunnels under the Egypt-Gaza border following tension with Israel, security officials said Saturday.

Hundreds of tunnels snake under the 9-mile (14-kilometer) border, where smugglers bring Gaza supplies and fuel limited by an Israeli blockade. Israel charges Gaza's Hamas rulers get weapons, ammunition and rockets through the tunnels and smuggle militants out.

Officials said that this week, three mechanized sensors were activated to identify tunnel locations and mark them for destruction. Earlier efforts were confined to trying to close tunnel openings, as well as one failed effort to drive a steel wall deep into the sand. 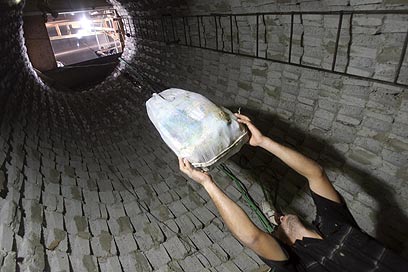 The officials were speaking on condition of anonymity because they were not authorized to speak to reporters.

Israel and Egypt are increasingly concerned about the tunnel threat following an attack last month near Israel's southern city of Eilat, near the Egyptian border and a rising presence of Islamic militants in Egypt's Sinai desert alongside Israel.

Israel says Gaza militants entered Sinai through the tunnels and crossed back into Israel, attacking vehicles and killing eight Israelis.

Israel-Egypt relations took a hit when five Egyptian police were killed during a firefight between Israeli forces and fleeing militants. Egypt was outraged, and Israel apologized.

Previous attempts to close the tunnels before have failed to curb illicit trade and people trafficking under the border, following the blockade imposed on the seaside territory in 2007, when Hamas seized control.

The officials said the operation, which began Wednesday, is closely coordinated by the military leadership. So far, three main arteries have been detected, and one was destroyed, they said.

The officials said the tunnels will not be blown up. Instead, they will be filled with cement and water.