The mayor of the town of Qalat Diza, Hassan Abdullah, and Capt. Ali Mohammed of the Iraqi army's border guards, said seven Iraqi civilians died in an attack on Kortak mountain, located on Mount Qandil, near the Iraqi-Iranian border. The two officials said the bodies were charred and dismembered.
Diplomatic Strife
Israel's embassy in Turkey might not have new ambassador
Ronen Medzini
Jerusalem concerned Turkey won't approve replacement for Ambassador Gabby Levy, who is set to leave Ankara shortly after release of Palmer Report on 2010 flotilla
Israel's embassy in Turkey might not have new ambassador
Firat, a news agency close to the Kurdish rebels, also said seven people – including five children and a woman – were killed inside a car while trying to flee raids on the village of Golle, on Qandil. Turkish warplanes have been striking at suspected rebel positions across the border in Iraq since Wednesday. The military has confirmed three days of strikes so far, but Kurdish groups also reported bombings by Turkish jets on Saturday and Sunday. Turkey's latest offensive follows stepped-up attacks by the rebels of the Kurdistan Workers' Party, or PKK, that have killed some 40 soldiers since July. Turkey's military has said the jets are targeting PKK sites only – including shelters, anti-aircraft gun positions and ammunition depots – showing "the necessary" care not to harm civilians. 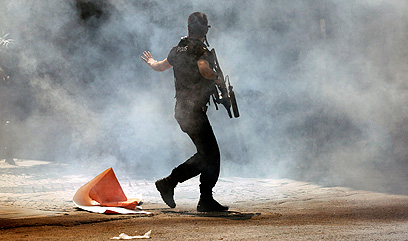 The PKK has denied that claim saying this week's strikes on Qandil and mountainous areas along the Iraqi-Turkish border, have aimed at abandoned rebel bases and have caused damage to civilian-owned homes and land.

The group, considered a terrorist organization by the United States and the European Union, is fighting for autonomy in southeastern Turkey. Tens of thousands of people have been killed in the conflict since 1984

The rebels have long used northern Iraq as a springboard for hit-and-run attacks on Turkish targets. The latest offensive from Turkey began hours after eight soldiers and a government-paid village guard were killed in a PKK ambush near the border with Iraq.

Turkey has carried out a number of cross-border air raids and ground incursions over the years but has failed to stop rebel infiltration through the mountainous border. The previous offensive was last summer, when warplanes launched a series of raids on suspected PKK positions and ground troops took part in a daylong incursion. In Turkey on Sunday, police used tear gas and pepper spray to disperse Kurdish protesters who tried to march to a main square in Istanbul to denounce the Turkish raids. In the capital, Ankara, demonstrators marched to protest the PKK.