Turkish Foreign Minister Ahmet Davutoglu condemned what he referred to as pro-Israel statements made by opposition leader Kemal Kılıçdaroğlu Thursday and called for political solidarity. Davutoglu pointede to Israel's Opposition leader Tzipi Livni as an example of solidarity, claiming she aligned herself with Prime Minister Benjamin Netanyahu's policy.

The Turkish foreign minister slammed the leader of the of the Republican People's Party (CHP) saying that his words could have been mistaken as those of an Israeli person. "Kılıçdaroğlu repeated what has been said in Israel, and that is very sad," he was quoted as saying by the Zaman newspaper.

He was addressing remarks made by Kılıçdaroğlu at a recent press conference criticizing the decision to expel the Israeli ambassador from Ankara: "Nothing good will come out of it and there is no point in risking our interests with small deeds." 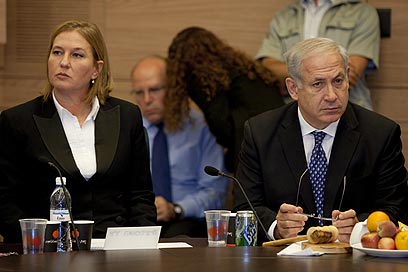 Livni and Netanyahu. On the same page? (Photo: Dudi Vaknin)

He added: "The Turkish government aimed to delegitimize the Gaza blockade and ultimately led to the UN's legitimization of the blockade. Can this be regarded as successful foreign policy? Turkey has lost on all fronts: Its citizens were killed, it was defeated in the legal arena and has lost leverage in lifting the blockade which has only consolidated further." 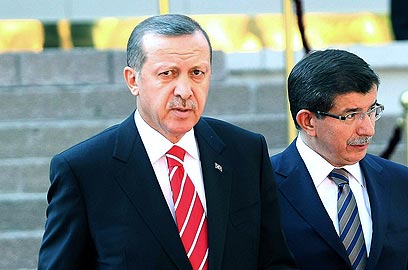 Davutoglu, on his part, claimed that instead of criticizing the ruling party, the opposition should "avoid hurting the state which has lost nine of its citizens." Drawing attention to Israeli opposition, he said that it was "on the same page" as the Israeli government in terms of the policy vis-à-vis Turkey.

He repeated remarks made by Prime Minister Recep Tayyip Erdogan who signaled that further sanctions will be imposed on Jerusalem. "We shall keep pursuing demands from Israel from every international podium, including the UN."

Opposition leader Tzipi Livni responded to Davutoglu's comments, saying she will continue to present a clear stance in defense of IDF soldiers and Israeli security.

"Despite deep disagreements with Netanyahu regarding his diplomatic conduct, I'll keep defending IDF soldiers as they work to secure the nation," Livni said. "There will be no rift between us on this issue. Both countries must revert back to talking with each other, not about each other."