Israel decides not to respond to Erdogan rhetoric

Israel has decided not to respond to Turkish Prime Minister Recep Tayyip Erdogan's anti-Israel rhetoric for the time being. The eight-minister forum reached the decision Wednesday after hours spent discussing the crisis with Ankara.

State officials defended the decision but at the same time harshly criticized the Turkish leader, who is currently visiting Cairo. "We'll let Erdogan lash out some more," one official said. "Israel has no intention of escalating the situation further, and the person doing this is Erdogan. His statements are a bully's slogans."

Since the release of the Palmer Report into the 2010 flotilla events determining that the Gaza blockade was legal, Turkey has taken a number of penalizing steps against Israel accompanied by tough rhetoric. 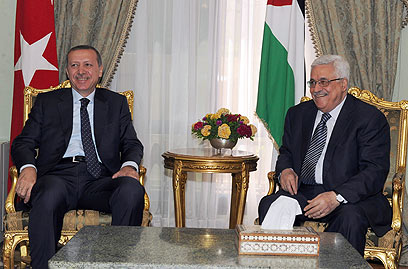 The Israeli ambassador was expelled from Ankara, the level of diplomatic relations downgraded and military and defense trade ties suspended. Ankara has also expressed willingness to take the flotilla raid to international legal forums.

Israeli officials said that Washington has sent strong messages to Erdogan demanding that "he calm down" after he said Turkish warships will escort Gaza aid ships and ordering Turkey's Air Force to modify a system in a way that will allow warplanes to fire at Israeli targets. A similar message was also sent by NATO.

The Turkish leader met with Palestinian President Mahmoud Abbas on Wednesday. The two discussed the Palestinian statehood bid and Abbas expressed his appreciation for Turkey's support on the matter. Erdogan later met with representatives of Egypt's Muslim Brotherhood who criticized him for calling on Cairo to embrace a secular constitution.

European Parliament Member Elmar Brok expressed pessimism over Erdogan's efforts to turn Turkey into a power in the Arab world, telling the newspaper Der Spiegel that Ankara "is using the conflict with Israel in order to gain credibility in the region."

Brok noted that Erdogan is seeking to return to Turkey the standing it had "earlier with the Ottoman Empire."

EMP Alexander Graf Lambsdorff told Der Spiegel that Erdogan's aggressive approach indicates that Turkey has no interest to continue the pursuit of EU membership. "With a strident anti-Israel course, it isn't making any friends in Europe," Lambsdorff said.

EMP Daniel Cohn-Bendit, on his part, said that blame for the Israeli-Turkish crisis should not fall on Ankara alone. According to Cohn-Bendit, while the Turkish prime minister's "macho posturing" can be politically dangerous, it is also justifiable due to Israel's unwillingness to compromise. "Erdogan is deeply injured," he said.