Prime Minister Benjamin Netanyahu headed to the US early Wednesday, as an Israeli diplomatic blitz was underway in New York in the aims of thwarting a Palestinian statehood win at the Security Council. The Israeli campaign is meant to prevent a two-thirds majority from endorsing a Palestinian state in the vote, thereby avoiding a US veto against the decision. PM Netanyahu will be meeting with President Barack Obama Wednesday to discuss the latest developments.

The Israeli effort is already bearing fruit, with Nigeria – previously slated to support the Palestinian bid – now saying it will abstain in the vote. The Nigerian announcement was made following a meeting between Defense Minister Ehud Barak and Nigeria's President Goodluck Jonathan, who visited Israel back in 2007. Barak also met with Nigeria's oil minister.

Diplomatic sources at UN headquarters confirmed in a conversation with Ynet that Nigeria will apparently abstain in the vote. In such case, the Palestinians will require the support of both Gabon and Bosnia in order to win a two-thirds majority at the Security Council.

At this time, five Security Council members are certain not to endorse the Palestinian statehood bid: The US, Germany, France, Britain and Columbia. Israeli officials estimated earlier that Gabon will be voting in support of the Palestinians, but an official Gabonese statement said the country has still not decided on its stance.

Laure Olga Gondjout, the chief of staff of President Ali Bongo, told The Associated Press by telephone from Libreville on Tuesday that the country's delegation to the UN has not yet submitted its position on the matter. When asked how Gabon would vote, he replied: "We have not turned in our position statement ... We cannot anticipate a recognition of the new state of Palestine - or a non-recognition at this point." 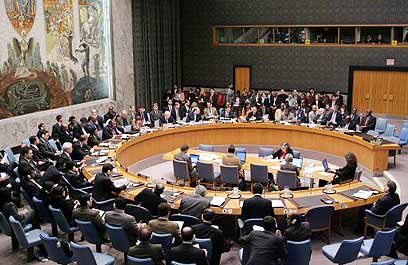 The Palestinians need a majority of nine out of the Security Council's 15 members to win the vote and force the US to impose a veto.

President Shimon Peres was scheduled to speak with Gabon's president while PM Netanyahu set a meeting with the prime minister of Portugal, another country expected to endorse the Palestinian bid. Meanwhile, Britain's Catherine Ashton and Tony Blair were joining forces with US Secretary of State Hillary Clinton in a bid to formulate an International Quartet statement that would prompt the resumption of Israeli-Palestinian negotiations.

Before heading to New York, Prime Minister Netanyahu met with Likud ministers and Knesset members, vowing to safeguard Israel's interests at the UN.

"It is important for us to go to the UN and present our truth, that of a nation attacked time after time by those who object to its existence," the prime minister said. "We are extending our hand in peace. I said that the way to peace is through direct negotiations and not through unilateral declarations in the UN.

"Why does Abbas need to meet with Netanyahu? Just for the sake of meeting?" Erekat said. "The only thing we have seen from Netanyahu is PR meant to serve the media's need for an evening news headline."

Meanwhile, French also urged the Palestinian Authority to drop its UN membership bid: The French and US presidents planned to heap pressure on their Palestinian counterpart Wednesday in a concerted push to persuade Mahmoud Abbas to withdraw his bid.

French President Nicolas Sarkozy will make his pitch during a speech at the opening session of the UN General Assembly. After he speaks to the world body, President Barack Obama will likewise argue against the Palestinian drive for UN membership when he meets with Abbas on Wednesday.

Attila Somfalvi and AFP contributed to the story