Palestinian Foreign Minister Riyad al-Maliki described the Quartet proposal for the resumption of peace talks between Israel and the Palestinians as "lacking" as it did not address a cessation of settlement construction and an Israeli withdrawal to the 1967 lines.

In a radio interview Saturday, al-Maliki said that the only innovation was a timetable for negotiations on borders and security. He noted that he hoped the Security Council will not take long in discussing the Palestinian bid for UN recognition.

The International Quartet of Middle East mediators proposed on Friday that Israel and the Palestinians should meet within one month to agree an agenda for new peace talks with a goal of a deal by the end of 2012. 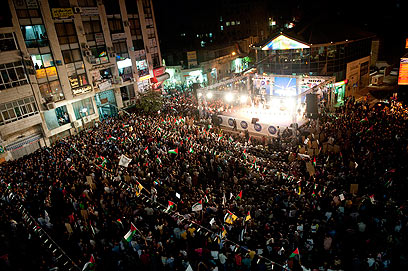 In a statement, the Quartet - the United Nations, the European Union, the United States and Russia - said it wanted to see comprehensive proposals within three months on territory and security, and substantial progress within six months. It was also stated that the Quartet will convene an international summit in Moscow.

Al-Maliki said that the Palestinian leadership is still negotiating its bid with several Security Council members, which have yet to form an official stance on the matter, such as Gabon, Nigeria and Bosnia.

Meanwhile, PLO Executive Committee Secretary-General Yasser Abed Rabbo said that Palestinian President Mahmoud Abbas' UN speech was the beginning of a new, grueling political phase which will culminate with the recognition of Palestine. He added that Abbas' address had concluded the stage of negotiations, or lack of negotiations, and is the beginning of a political action which will end the violation of Palestinians' human rights.

Addressing Prime Minister Benjamin Netanyahu's speech, Abed Rabbo said it was abundant in lies, and selective in facts and historical developments. He stressed that Netanyahu made "false claims about the desire for negotiations." Israel still believes there is a chance to play the old game, Abed Rabbo said, but "the world will judge between those who seek a just peace and those who deny historical facts. "

Meanwhile, a senior US official said Saturday that the timetable presented for an Israeli-Palestinian peace deal was possible. The timetable, he said, was based on US President Barack Obama's May speech. The official believes there is a chance to lay down a proposal on borders and security within three months.

He stressed the importance of resuming peace talks with no preconditions and said that negotiations will focus on Obama's plan. He said he believes that Abbas and Netanyahu are eager to enter into direct talks and that the Quartet announcement will serve as a serious alternative route to the Palestinians' UN bid. Nevertheless, he stressed that the Security Council was not part of the Quartet statement.

There is no connection between the Palestinians submitting their bid to the Security Council and the timetable proposed for negotiations, he said.

According to the official, Israel has shown flexibility in response to ideas raised in Washington based on Obama's principles. Netanyahu, he said, addressed the process in his speech, and showed general flexibility.

It was also stressed that the Quartet will not be involved in negotiations but that the US will monitor proceedings,