Hamas declared victory Tuesday as hundreds of Palestinian prisoners were freed in exchange for captive soldier Gilad Shalit. In Gaza, Hamas Prime Minister Ismail Haniyeh was spotted gesturing V with both his hands. The Islamist movement prepared a military band to accompany the celebrations.

Gaza declared a national holiday and schools were closed. The road from the Egyptian border with Egypt was turned into a military zone and sealed off.

The web of electricity cables slung over Gaza's main streets was decorated with the green flags of Hamas. The streets were full of men in pick-ups, convertibles and rickshaw trucks waving the brightly-colored banners of Gaza's militant factions.

A wall painting lampooned Prime Minister Benjamin Netanyahu, depicting him with his face ground into the dirt by the boot of a gunman, signing a paper with words "Swap deal".

Palestinians riot as Prisoner exchange deal is completed Gilad Shalit: I Thought I'd stay in captivity for years


"I think the deal represents something great for the Palestinian people. Those who are still in jail are happy for those who have been released." said Hamas deputy leader in exile Moussa Abu Marzouk, who greeted prisoners arriving in Egypt from Israel. 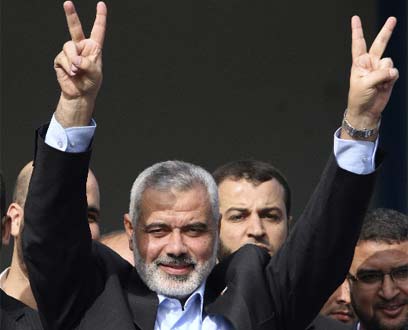 Patriotic songs blared from loudspeakers as prisoners arrived to a heroes' welcome at the Rafah crossing. Some kissed the soil as they arrived. Some were carried on the shoulders of happy relatives. Women ululated and men chanted Allahu akbar (God is greatest).

Hamas prime minister in Gaza Ismail Haniyeh joined scores of officials to greet freed prisoners coming in from Egypt, along with hundreds of family members impatient for the big reunion.

Haniyeh kissed their foreheads, paying special respect to Yehya Al-Sinwar, a top Hamas security strategist who spent 23 years in jail, and his deputy Rawhi Mushtaha who was also serving a life sentence.

"Thank you to the forces of the resistance for returning us as liberated heroes," said one prisoner.

Sinwar called on the group's military wing to kidnap more Israeli soldiers in order to free the remaining prisoners in Israeli jails.