'Gilad Shalit is home' says IDF spokesman Mordechai as Shalit enters Israel after 1,941 days in Hamas captivity. Egyptian TV footage shows Shalit walking in terminal escorted by Egyptian security officers as he appears in good health. Ahmed Jabari, head of Hamas' military wing, was one of those seen leading Shalit in the video (left of Gilad in the image above). Watch live broadcast

After 1,941 days in Hamas captivity, Gilad Shalit has returned home: IDF soldier Gilad Shalit entered the Kerem Shalom crossing just before noon on Tuesday and was greeted by Israeli army officers. He is seen walking with the officers as they conversed with him. 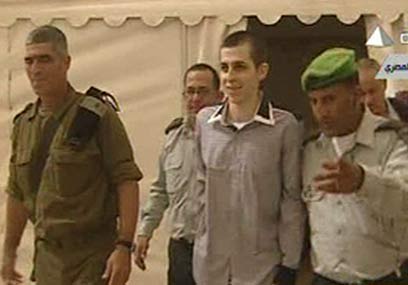 Earlier, Egyptian television broadcast the first images of Shalit as he was escorted by Egyptian security personnel at a terminal in Egypt. He was seen walking and appeared to be in good health.

"Gilad Shalit is home," Israel's chief military spokesman said a short while after the images were broadcast.

Brigadier-General Yoav Mordechai made the announcement on live television at Israel's Kerem Shalom border post with Egypt, where Shalit crossed into Israel. 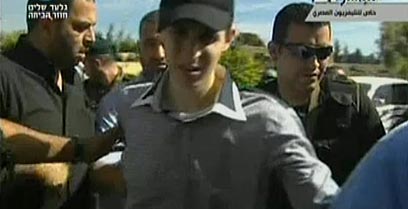 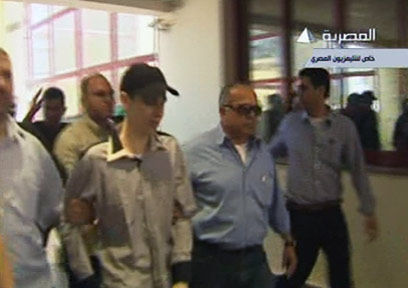 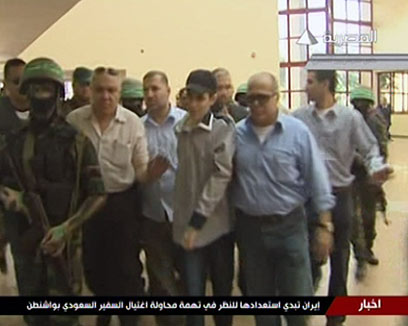 Ahmed Jabari, head of Hamas' military wing, was one of those seen leading Shalit in the video (left of Gilad in the image above).

Earlier, one of Hamas' leaders in the Gaza Strip confirmed that the group has handed over Shalit to Egypt as part of the prisoner swap with Israel.

In a text message, Mahmoud Zahar said that his group is no longer holding Shalit. Palestinian officials in Gaza said an SUV whisked Shalit across the border and quickly returned to Gaza early Tuesday.

Earlier, the BBC network reported that an Israeli official has seen Shalit after Hamas handed him over to Egyptian authorities.

According to the al-Arabiya network, Shalit has arrived at the Egyptian side of the Kerem Shalom crossing and will soon be handed over to Israeli authorities. 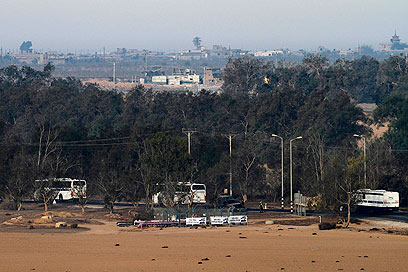 On the Israeli side of the border, all 477 prisoners set to be released as part of the first stage of the Shalit deal have been handed over to the Red Cross en route to Gaza.

Busses carrying the prisoners that are to be deported to Egypt and overseas are entering Egyptian territory. Busses also left Ofer Prison near Jerusalem carrying prisoners set to be released to the West Bank.

The exchange was briefly delayed as two female Palestinian prisoners refused to move to the Gaza Strip from Israel and insisted instead to move to Egypt. The problem was eventually solved when one of the prisoners came around and agreed to move to Gaza, while the other will be transferred to Egypt which agreed to take her in. 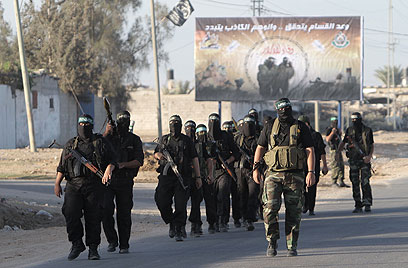 One of the prisoners is Miryam Salim Tarabin, originally from Jericho, who was arrested in 2005. She was sentenced to eight years and two months in prison. Tarabin is meant to be released to Gaza where is family lives.

According to reports, the second prisoner is Amna Muna, who lured teenager Ofir Rahum to his death in 2001. She is considered the leader of the female Palestinian prisoners held in Israel and previous reports suggested she terrorized inmates. It was feared that families of the prisoners will seek revenge over her abuse of the other inmates.

The Shalit family has arrived at the Tel Nof air force base in central Israel, where they will reunite with Gilad.

At Tel Nof, the Shalits hugged Defense Minister Ehud Barak who came to the base. Prime Minister Benjamin Netanyahu told the family as he arrived, "I am happy we have reached this day. In a short while, Gilad will come back to you."

Netanyahu told the Shalits that they will receive a photo of Shalit as soon as he reaches Israel.

Shalit's grandfather Zvi said upon arrival at the Tel Nof Air Force base that the family is being blessed by Gilad's return. He believes that this is a great day for the State of Israel. He stressed that the family wasn't celebrating the release of the murderers.

The prisoner exchange deal signaling the end of Shalit's five-year Hamas captivity began in the early hours of Tuesday morning, as the Israel Prison Service (IPS) shuttled all 477 Palestinian prisoners slated to be released as part of the first stage of the deal to their rendezvous points with Red Cross.

In Tel Nof, Shalit will first meet Prime Minister Benjamin Netanyahu, Defense Minister Ehud Barak and IDF Chief of Staff Benny Gantz. Only later, at a different room in the base restricted to unauthorized military personnel, will Gilad be reunited with his family.

Ynet reporters, Reuters and AP contributed to the report