Tunisia is celebrating long awaited democratic elections but in Israel, defense chiefs express concern over growing influence of Islamist elements. Gantz: 'This creates scope of threats that Israel, IDF must prepare for'

Tunisia celebrated the results of their Arab Spring this week with democratic elections and the new leadership of the Islamist Ennahda party. And while the victorious party is making every effort to ease local secular concerns, Israel's defense establishment is closely following the political developments in the country that led to the outbreak of the Arab Spring.

"We are living at a time when the world in general and the Middle East in particular is changing," said Defense Minister Ehud Barak at the graduation ceremony of an IDF officers course, Barak added: "The Arab Spring undermines tyrannical regimes and rulers. It gives expression to the will of the people, but also opens the door to radical Islamist elements that threaten the stability of the entire region." According to the defense minister: "Our hands are always extended to peace, but we won't always receive response. The true response is a strong, prepared and ready IDF. Well-trained well-equipped with the Field Command at its core."

IDF Chief of Staff Lt.-Gen. Benny Gantz also spoke of the regional changes: "The changes are redrawing the range of threats faced by Israel, in addition to the stubborn attempts made by terror groups to harm the State of Israel and its citizens.

"Together this creates a scope of threats that Israel and the IDF must be prepared for, which you as the new IDF field commanders will have to deal with." 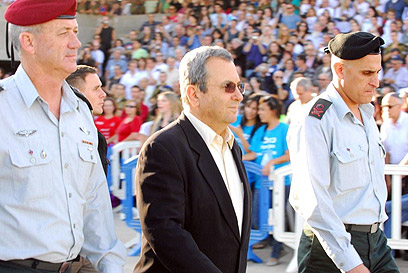 Earlier, former Shin Bet Chief Yuval Diskin discussed the Arab Spring in general and the elections in Tunisia specifically: "The Muslim Brotherhood is taking shape as a major player in Tunisia's regime. The question is, where will it go, will it become another extremist Islamist country or will it take a more moderate path, it's hard to say."

Tunisia has yet to publish the official election results but the Ennahda party is set to be announced the victor with a massive lead on the other contenders.

Seeking to reassure secularists in Tunisia and elsewhere who see a threat to their liberal, modernist values, party officials said they would bring two secularist parties into a broad interim coalition that would govern the country.

Yet in spite of promises to the contrary from party leader Rachid Ghannouchi, many of the country's secular citizens still fear that their way of life will now begin to change.