Meridor to Ynet: Not the same Likud

Minister Dan Meridor expressed concern over the Knesset's approval of two controversial bills that have been criticized as rightist attempts to curb Israel's judicial system. The first bill calls for the automatic appointment of the Bar Association president to the state's judge selection committee, while the other, dubbed the Grunis bill, calls for the reduction of the Supreme Court presidential term from three years to two.

Speaking to Ynet from Argentina late Monday night, Meridor said "we are in the midst of a wave of (bad) legislation which must be stopped. I am doing my best, and some of it has been contained. The trend is clear. This constitutes a change in Likud's historic role as the protector of the court and the independence of the (judicial) system, as well as its role in the prevention of the system's politicization." 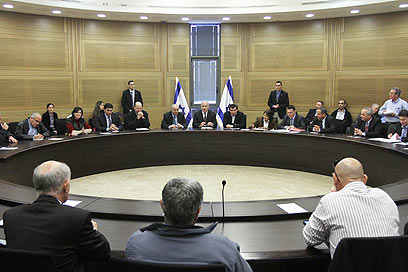 Meridor, a member of Likud, admitted that the bills were aimed at weakening the judicial system, but said some of the recent controversial bills have been submitted by parliamentarians from other parties. "We filed an appeal against the bill which was approved by the Ministerial Committee on Legislation Sunday (foreign funding bill). We will explain why it is wrong. "In a democracy a majority is required to change things, as well as to influence them. Not all of the battles (against the legislation) are reported, but the battle is ongoing," the minister told Ynet. Senior Likud officials told Ynet that another controversial bill, which would give the Knesset veto power over Supreme Court nominations, would be a "casus belli" (event or action that justifies or allegedly justifies a war) for some members of the ruling party, who, according to the officials, would not let the bill pass.

"It is in (Prime Minister Benjamin) Netanyahu's hands; he knows what is at stake, and he will probably not allow the bill to pass," one Likud official said. "Holding a hearing for judges would be a terrible thing." However, MK Zeev Elkin (Likud), one of the bill's initiators, is optimistic: "I am glad that the Knesset passed the two (aforementioned) bills and did not succumb to the fear campaign conducted over the past few days.

"It is baffling to see (Opposition leader) Tzipi Livni and her Kadima party, who fought the court with the help of (former Justice Minister) Daniel Friedmann's reforms in the previous Knesset, are now trying to present themselves as the court's protectors. We will continue to push without fear for an open discussion in the Knesset on the need for reform in the judicial field."

Fellow Likud member Yariv Levin, who along with Elkin drafted legislation which proposes that the Knesset's Constitution, Law and Justice Committee have the authority to vet – and if need be veto - Supreme Court candidates, told Ynet "(Monday's) vote proves once again that there is clear support from both the Knesset and the public for comprehensive reform within the justice system and for and ending the control of a small elite from (Jerusalem's upscale Rehavya neighborhood) over a system which belongs to the entire public. Senior Likud officials said they estimate that the foreign funding bill, which aims to limit the ability of leftist organizations to raise money from foreign bodies, will not pass either. "Netanyahu will take the necessary steps to block this proposal," one official said. "The international pressure will take its toll, and eventually this bill will be thrown out by the government." Moran Azulay contributed to the report