Israeli aircraft in turn targeted Palestinian rocket-launching cells, killing at least two terrorists as they were preparing to fire at Israel, Palestinian sources said. The two fatalities were taken to a local hospital.

Earlier, a three-rocket barrage landed in southern Israel, causing no injuries or damages. A short while later, another rocket landed in the south, also in an open area. According to other reports, the anti-rocket siren was activated in an industrial zone in the southern Israel city of Ashkelon. No rocket hits were reported in the area. 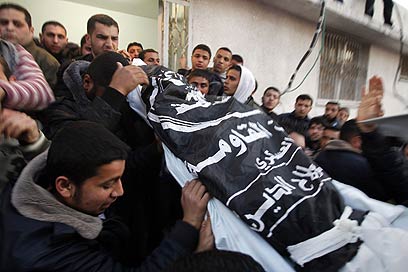 Later, two more Qassam rockets were fired from the Gaza Strip at the Ashkelon Beach regional council. Another rocket exploded in an open area in the Eshkol region. Two additional rockets and a mortar shell landed in Eshkol shortly before 9 pm, causing no injuries or damages.

Another rocket exploded in Eshkol a short while later, as Gaza terrorists continued to pound Israel's south into the night.

Friday evening, the IDF Home Front Command issued instructions for Gaza-region communities located near the border, in the wake of the escalation in the region. The orders include the cancellation of all children's events in the area Saturday.

Meanwhile, IDF Southern Command Chief Tal Russo ordered the closure of Highway 12, near Israel's border with Egypt, to civilian traffic as result of regional tensions. The road was only opened for traffic last week after being closed down for months in the wake of the terror attack in the area in August 2011 that claimed the lives of eight people.

Following the assassination, Gaza terrorists vowed to avenge the killing and hit back at Israel. The Popular Resistance Committees' retaliation for the assassination of its leader will "shake the earth," the group threatened.

A spokesman for the organization's military wing said the group ordered its fighters to respond to Zuhir al-Qaisi's assassination.

Nabul Abu-Rudeina, aspokesman for PA leader Mahmoud Abbas said the Israeli escalation is creating a negative atmosphere that is prompting another round of violence in the area.

"The Israeli government will bear the implications of the strike," he said.

Neri Brener and Yoav Zitun contributed to the story