Zuhir al-Qaisi, also known as Abu Ibraim, was planning a mega-attack in recent days that could have resulted in numerous casualties, the army said. The planned multipronged terror strike was to originate from Egypt's Sinai Peninsula, military officials said.

Al-Qaisi was assassinated in order to avert the mega-attack, which was in final stages of preparations, the IDF said. 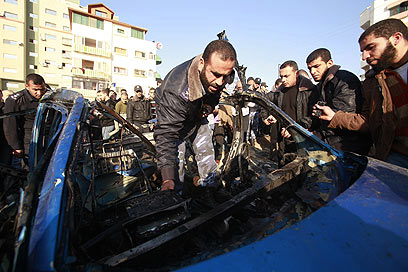 The killed terror chief, who headed the Popular Resistance Committees group and served as its political chief, was involved in the lethal Egypt border attack on August 18, 2011 that left eight Israelis dead.

Al-Qaisi was also involved in a terror attack at the Nahal Oz fuel terminal on the Gaza-Israel border in 2008 and in ongoing rocket fire on Israeli communities.

According to Palestinian reports, the second fatality in Friday's IDF strike was Ahmad al-Khanini, a senior PRC terrorist freed last year in the framework of the Gilad Shalit prisoner swap.

Meanwhile, the Popular Resistance Committees said it will respond to "Israel's dangerous escalation by all means available."

Speaking after the IDF assassinated the group's chief, PRC Spokesman Abu Mujahid said his group was no longer committed to a lull in Gaza vis-à-vis Israel.