The Security Council unanimously approved a resolution Saturday expanding the number of UN ceasefire observers in Syria from 30 to 300 and demanding an immediate halt to the violence that has been escalating since the government and Opposition agreed to end hostilities over a week ago.

The Russia-European drafted resolution said that deployment of the UN observer mission, which will be called UNSMIS, will be "subject to assessment by the secretary-general of relevant developments on the ground, including the cessation of violence."

'Lebanon won't attack Israel in case of strike on Iran'

The resolution gives Secretary-General Ban Ki-moon authority to decide when to deploy the additional observers, based on developments on the ground including "the consolidation of the ceasefire." Ban accused Syrian President Bashar Assad on Thursday of failing to honor the ceasefire, expressing dismay that increased violence is claiming more lives.

The UN chief welcomed the Security Council's decision to authorize the bolstered monitor mission and urged the Syrian government and Opposition to make their deployment possible.

"(Ban) stresses the need for the Government of Syria to end all violence and human rights violations, and in particular to stop the use of heavy weapons and to withdraw such weapons and armed units from population centers," his press office said in a statement.

The council's resolution noted that the cessation of violence by the government and opposition is "clearly incomplete" and warned that the 15-nation body could consider "further steps" in the event of non-compliance with its terms.

Like the council's resolution from last week that authorized deployment of an advance team of up to 30 monitors, Saturday's resolution calls on both the Syria government and opposition to halt fighting that has killed thousands over the past year. 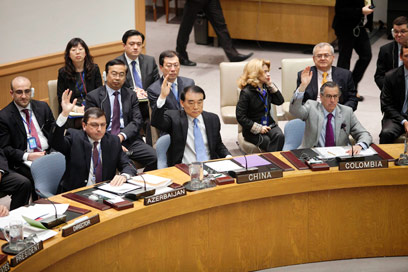 The council's move to condition deployment of UNSMIS on Ban's assessment of compliance with a truce reflected the fact that the US and European delegations are concerned about the failure of the Syrian government to halt the violence, return troops to barracks and withdraw heavy weapons.

"We now see the main aim as being the unswerving clear respect by all parties of the provisions of the resolution," he told the council. "Any deviation in terms of interpretation, or deviation from the provisions is unacceptable."

French Ambassador Gerard Araud said "we're taking a risk" with the deployment of UNSMIS, adding that the council would have to consider sanctions if Damascus continues the violence. President Bashar Assad's opponents fear that a few hundred observers with a weak mandate would act as little more than a fig leaf for the government, thwarting more robust intervention to halt the bloody crackdown on cities that have risen up against Assad.

A handful of monitors has been in the country for a week as an advance party while diplomats hammered out the mandate for a force of hundreds. During that time, a ceasefire has so far failed to end violence in the worst-hit parts of the country.

On Saturday, the Syrian state news agency said that an "armed terrorist" group had blown up an oil pipeline in the eastern province of Deir al-Zor, near the border with Iraq.

The wobbly truce was undermined yet again on Friday when at least 42 people were killed – 15 of them by two roadside bombs targeting security forces and many of the others by government forces' shelling of Homs.

Yitzhak Benhoring contributed to the report