Syria says it will stop fighting by UN deadline

Syria promised to stop fighting in time for Thursday's deadline for a ceasefire brokered by special envoy Kofi Annan but reserved the right to respond to any aggression, a hedge against any end in the fighting that has convulsed the nation for more than a year.

The statement came Wednesday as Annan was in Tehran to seek support for his faltering plan to stop the country's slide toward civil war. Iran is one of Syria's most powerful allies.

Many world leaders see Annan's plan - which called for Syria to pull its tanks back to barracks on Tuesday, followed by a full ceasefire by both sides by 6 am Thursday - as the best hope to calm a year-old conflict that the UN estimates has killed 9,000 people. 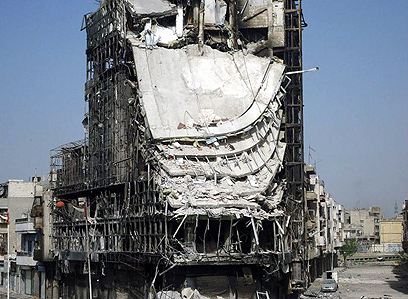 But the US and others also are skeptical President Bashar Assad's regime will fully comply after several previous failures. Syria disregarded the Tuesday deadline, and was still attacking its opponents Wednesday with rockets and mortar fire.

In a statement carried on the state-run SANA news agency, a defense official said Syria's army successfully fought off "armed terrorist groups," which is the term Damascus uses to describe those behind the country's year-old uprising. "A decision has been taken to stop these missions as of the morning of Thursday, April 12, 2012," the unnamed official said, adding: "Our armed forces are ready to repulse any aggression carried out by the armed terrorist groups against civilians or troops."

Annan spokesman Ahmad Fawzi said Syrian Foreign Minister Walid Moallem sent a letter with an identical pledge to the joint UN-Arab League envoy. Fawzi said Annan will work with the Syrian government on implementation of his six-point plan to end the bloodshed.

"The joint special envoy looks forward to the continue support of relevant countries in this regard," Fawzi said. The UN has ruled out any military intervention of the type that helped bring down Libya's Moammar Gadhafi, and several rounds of sanctions and other attempts to isolate Assad have done little to stop the bloodshed. The Syrian uprising, which began in March 2011 with mostly peaceful protests but has escalated into an armed conflict, is among the most explosive of the Arab Spring. The presence of Syrian tanks, along with security forces and snipers, have largely succeeded in preventing protesters from recreating the fervor of Egypt's Tahrir Square, where hundreds of thousands of people camped out in a powerful show of dissent that ultimately drove longtime leader Hosni Mubarak from power.

'They shelled it until it totally collapsed'

It's not clear how Syria can fully abide by Annan's plan without risking an embarrassing - and potentially dangerous - Tahrir-style sit-in, or losing control over territory that government forces recently recovered from rebels.

And despite Syria's pledge, there was more violence Wednesday, underlining doubts about the regime's intentions. The mounting death toll has prompted intense diplomatic efforts, including a last-minute plea by Annan to Tehran for help. "Iran, given its special relations with Syria, can be part of the solution," Annan said during a news conference with Iran's Foreign Minister Ali Akbar Salehi in Tehran. "The geopolitical location of Syria is such that any miscalculation and error can have unimaginable consequences." Iran has opposed any foreign intervention in the crisis and Salehi insisted that "change in Syria" should come under the leadership of Assad. In recent weeks, the government has escalated military attacks on opposition strongholds, particularly after the cease-fire timeline was announced at the beginning of April, prompting accusations that Assad was using the peace plan as cover for more violence. On Wednesday, Syrian troops took control of parts of villages and towns near the border with Turkey, in an apparent attempt to widen control as the truce draws close. Activist Mohammed Abu Nasr said Syrian forces entered the border town of Azaz, about two miles (three kilometers) from the Turkish border and set homes of activists on fire. The Local Coordination Committees, an activist network, said heavy army reinforcements of 30 vehicles, including tanks, took positions around Azaz without giving further details. The group said that in the province of Idlib, which also borders Turkey, Syrian troops chased people trying to flee the country into Turkey and opened fire killing two and detaining four. The LCC also reported shelling of several rebel-held neighborhoods in the central city of Homs. Homs activist Tarek Badrakhan said troops shelled the Rajoub Mall, one of the city's largest, late Tuesday. An amateur video posted online showed the six-story building gutted by fire while a major part of it collapsed. As the building was on fire, gunshots could be heard. Badrakhan said the shopping center in the rebel-held neighborhood of Jouret el-Shayah had shops selling clothes, food products and electrical appliances. "They shelled it for a long time until it totally collapsed," Badrakhan said. SANA, meanwhile, said gunmen shot and killed army Brig. Gen. Jamal Khaled in the Damascus suburb of Aqraba on Wednesday morning. It added that Khaled's driver, a soldier, was also killed in the attack. In other violence, the Britain-based Syrian Observatory for Human Rights activist group reported clashes in the Barada Valley region on the outskirts of Damascus between troops and army defectors as government forces stormed the area. The Observatory said dozens of people were wounded. The Observatory said "tens of army vehicles" were deploying in the southern town of Maaraba. The Observatory added that two people were killed in the eastern town of Qoriah during raids by regime force. In neighboring Jordan, an interior ministry official said the country was now hosting 95,000 Syrian refugees who had fled the conflict. The official spoke Wednesday on condition of anonymity because he is not allowed to make statements to the media.