'I plan to lock them up.' Yishai
Photo: Hagai Dekel

Following the deportation of a several dozen illegal South Sudanese migrants, Interior Minister Eli Yishai told Ynet on Thursday that he has instructed the Population and Immigration Authority to "begin arresting Eritrean and north Sudanese nationals" in the coming weeks.

Earlier in the day an Eritrean man who is seeking asylum in Israel was arrested on suspicion of committing rape in Tel Aviv. "The infiltrator threat is just as severe as the Iranian threat," Yishai told Ynet.

"This case (arrest) shows just how problematic the personal safety issue in Israel has become. We must make people feel safe again." 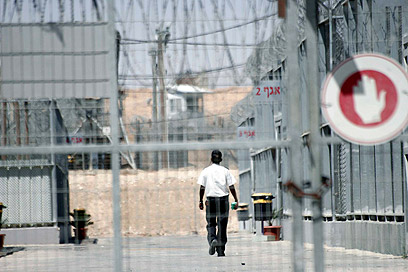 The number of asylum-seekers who enter Israel through the southern border has been constantly dropping. In July only 268 Africans entered Israel via the southern border with Egypt, compared with more than 1,000 who infiltrated the country in the previous months. Yishai attributed the reduction to the border fence and his plan, according to which business owners who employ illegal migrants are penalized.

He said the newly-enacted law stating that infiltrators who are caught will be jailed for up to three years has also had a positive effect, as did the deportation of South Sudan and Ivory Coast nationals.

Human rights groups and residents of south Tel Aviv have accused Yishai and the government of mishandling the migrant issue for different reasons.

Yishai has dismissed the claims made by human rights groups and accused the Foreign Ministry and Justice Ministry of "foot-dragging."

"I blame the foreign and justice ministries, which are not allowing me to deport (all of the illegal migrants). They have failed to reach a bold decision for the benefit of the Zionist dream," he said. "W've done some great things, and we will take even more important steps."

Yishai's solution is simple, if controversial. "For the time being, I plan to lock them up. This I can do without anyone's authorization. I am doing it for the good of the State of Israel.

"I have asked the Treasury for a budget increase to build more detention facilities, and until I can deport them I'll lock them up to make their lives miserable," said the minister.