The wave of anti-West riots that is sweeping through the Muslim world will gradually subside, mostly because the regimes in Muslim countries, from Indonesia to Algeria, realize that this wave threatens them more than it does the West.

This is why they have regained their composure and have begun taking measures to curb the riots: Access to western diplomatic missions has been blocked; large forces have been deployed in sensitive areas; and clerics, as well as Islamist politicians are urging the public to respect foreigners.
Anti-Islam Film
Muslims' sensitive issue
Yaron Friedman
Op-ed: Any attempt to ridicule Prophet Muhammad blurs line between extremist, moderate Muslims
Muslims' sensitive issue
When the riots erupted after the anti-Islam film was posted on YouTube with Arabic subtitles, the regimes in the Muslim countries displayed sympathy and understanding with the rage and violence of the masses, and they refrained from taking any measures to protect the US, British and German embassies. The street sensed that it had the government's support and went wild. Now the moderate Islamist leaders, including Egypt's Morsi and the Muslim Brotherhood, are taking action because they realize that this wave threatens them as well. The riots erupted, among other things, due to genuine rage in the Arab world over the movie, which was justifiably viewed as an intentional insult to the prophet Mohammed and an attempt to tarnish Islam's image. Every Islamic child is taught that the prophet and the Quran are sacred, so any attack on them, such as the Coptic film, stirs among Muslims a sense of an almost existential threat, as well as fear and frustration. All of these feelings were expressed in an outbreak of rage and violence. 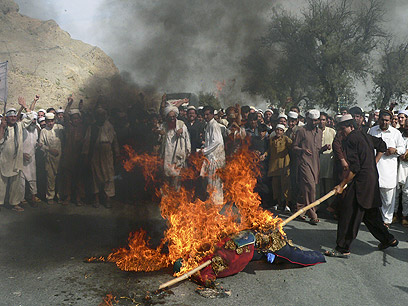 Another reason is what is referred to as the frustrating "cognitive dissonance" Muslims all over the world have been experiencing for the past 200 years or so. On the one hand they are taught from birth that Islam is a source of greatness and achievements in all fields – as was the case during the religion's golden age. On the other hand, the frustrating reality is that despite their oil reserves, the Muslims cannot integrate into the modern world and succeed in it. They are having trouble feeding their children when the heretics in the West boast unimaginable achievements in every field. According to Professor Dan Schueftan, all this creates feelings of insecurity, inferiority and sensitivity to any insult to the Arab honor – be it real or fictitious.

The third reason relates to the situation created as a result of the turmoil in the Arab world. Suddenly, the street became a dominant factor that imposes its will on the new Arab regimes, which are cautious not to anger it for fear they will meet a fate similar to, let's say, Mubarak's. This is apparent in Egypt, Tunisia, Yemen, Libya, Iraq, Jordan and even in the Palestinian Authority. If in the past the Arab dictatorships imposed their will on the people by way of draconian coercion and enforcement, today, in the aftermath of the revolutions, the Arab street imposes its will on the regimes. The regimes in Egypt, Libya and Yemen went as far as justifying the rage and violence of the masses in response to the anti-Islam film. Organized and armed terror groups inspired by global jihad and the Salafi movement took advantage of the chaotic situation created by the riots. It happened in Libya last Tuesday, and then in Sinai and Afghanistan. Over the past two years these groups, which consistently fight the West, the US and the secular Arab regimes have amassed weapons and power mainly because the regimes that once limited their activity are no longer. Now they are threatening the moderate Islamist regimes, which are aware of this threat and have begun to act. The fifth cause of the Muslim riots is the weak response from the West and the US Administration in particular. The statement from the White House and State Department, which was adopted by German Foreign Minister Westerwelle, condemned the insult to the Muslim religion's values and also said, in very soft rhetoric, that there is "no justification for this kind of senseless violence." Such a statement may be taken seriously in London or Berlin, but in the Muslim world it was interpreted as an admission of guilt by the US, which, from the Muslims' perspective, legitimizes violence. The lack of a threat allowed the masses to go wild. Despite the Obama Administration's mistakes, including extremely lax security at the US Consulate in Libya and the appeasing, almost Chamberlain-esque response to the violence, it is not too late to rectify the situation. Experience has shown that the US can still apply effective pressure on the new Arab regimes, including the Islamist ones, which are in need of Washington's aid. There is already an indication that the White House's policy is moving in this direction. Another option is to boost US military presence (in the air and on the ground) near or right above the sensitive zones and have Marines secure the diplomatic missions. Such measures have been proven to have a moderating effect on incited masses.