Op-ed: Islamists who rose to power with Obama's help want US out of Mideast

Obama's failures in the Middle East continue. During the latest one, thousands of Salafis surrounded American diplomatic missions in Libya and Egypt and would have destroyed them completely had they been given the opportunity to do so. The message was clear: Leave and don't come back.

In Benghazi an angry mob stormed the US Consulate and killed the ambassador and three other staff using rockets. In Cairo thousands of Salafis surrounded the US Embassy, scaled its walls and burned the American flag. Dozens of armored security vehicles and police squad cars prevented the mob from storming the building. The riots continued for hours.
Anti-Islam Film
Muslims' sensitive issue
Yaron Friedman
Op-ed: Any attempt to ridicule Prophet Muhammad blurs line between extremist, moderate Muslims
Muslims' sensitive issue
Wait a second. But this is Libya, where Obama and NATO directly assisted the rebels with weapons and bombardments on Gaddafi and his regime. So how is it that these same "rebels" are now attacking their "liberator"? These rebels are members of dozens of militant Islamist groups, some with links to al-Qaeda. Gaddafi curbed them, but now they can operate freely. They fight each other and also attack the Americans. These Salafis are not hiding their intent to drive western forces – headed by the Americans – out of the Middle East. In Cairo, Mohammed Morsi's regime allowed thousands to riot through the night outside the US Embassy while burning the American flag. Was it not the US that pushed for the establishment of an "Islamic democracy" in Egypt? And was it not the US that maintained contact with the Muslim Brotherhood and the Salafis? 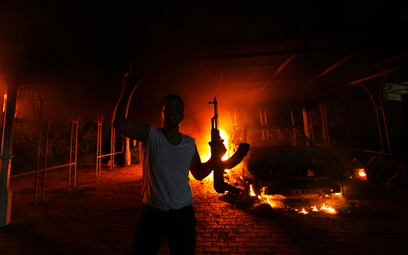 Attack on US Consulate in Benghazi (Photo: Reuters)

This was not a terror attack carried out by a few people; it was initiated by thousands who wanted to convey the message that they do not want the Americans around. This is how they are trying to get rid of the Americans, who helped them rise to power.

Just as former President Jimmy Carter's single term ended with the abduction of American diplomats in Tehran, Obama is now facing the collapse of his policy of support for the Islamic groups. He also has to deal with questions surrounding the fiasco in Benghazi. When Salafis attacked the Israeli embassy in Cairo, Prime Minister Netanyahu was up all night speaking on the phone with the Americans and Egyptians to ensure the Israeli diplomats' safety. Where was the US Administration on the night the American ambassador to Libya was murdered? Could he have been saved? Over the past two years, the Obama Administration's Mideast policy ousted the old regimes and turned the Arab countries into Afghanistan: Flooded with militias, extremist armed groups and severe violence - all under the auspices of the sacred democracy. And is there any doubt that if a Palestinian "state" is established it will become a source of existential danger to its neighbors Israel and Jordan? Another uncontrollable Salafi stronghold? Do we not see what is going on in Gaza, which is already undergoing a process of Salafization? Now the Obama Administration may finish the job by overthrowing Bashar Assad and turning Syria into a new Afghanistan – easy prey for ethnic militias and armed terrorist gangs; a country of anarchy and despair.