In addressing the UN General Assembly, it was clear that Prime Minister Netanyahu was looking to achieve three goals: Deter Iran and galvanize Western and Arab public opinion in favor measures that would give the "red line" he has set teeth, restore his relations with the Obama administration and rescue Israel from political isolation by presenting it as a hub of Western democratic modernity.

The speech was effective. It is safe to say that it achieved the first two goals: Deterring Iran by setting a reasonable "red line" which can be understood and supported by a large part of Western and Arab public opinion. Netanyahu also reassured Obama and his government, as well as some Israeli citizens who have had trouble sleeping lately. His speech made it clear that Israel still believes there is a narrow window of opportunity to pressure Iran before it crosses the line beyond which Israel alone would not be able to stop Iran's pursuit of a nuclear bomb.
Israeli Leader
Decision time
Yoel Meltzer
Op-ed: Can Bibi finally overcome his tendency to procrastinate and do what must be done vis-à-vis Iran?
Decision time
From this we can assume that the chances Israel will launch a preemptive strike on Iran's nuclear installations in the near future have been significantly reduced and are actually close to zero - certainly not before the US presidential elections in November and probably not during the upcoming winter either. The "red line" drawn by the PM does indicate that tensions are due to resurface in March 2013 in the event that Iran continues to enrich uranium to mid-level purity. To fully understand Netanyahu's "red line" we must keep a number of facts in mind:

Netanyahu stressed uranium enrichment as the sole criterion for measuring the advancement of Iran's nuclear program because nuclear weapons grade uranium has to be enriched to 93% and because Iran's uranium enrichment is being monitored by the UN's International Atomic Energy Agency, leaving the Iranians with very little room for deception or secrecy. However, the development and production of a nuclear warhead can be concealed in small factories.

Therefore, it is not at all certain that Western intelligence agencies would be able to detect the production of such a warhead for a missile or even the production of a primitive nuclear device that can be sent in a container to explode in some port. This is why Netanyahu drew the "red line" just below a label reading "final stage" to a bomb, in which the Iranians will be 90% along the path of having sufficient weapons-grade material and it would be too late to stop them.

For Netanyahu, the term "too late" refers to a situation whereby Iran will have sufficient weapons-grade material (or uranium enriched to 93% purity level) to produce one atomic bomb. Currently the Iranians do not have even one ounce of weapons-grade material, but they have already amassed about 200 kilograms (about 440 pounds) of 20% material. 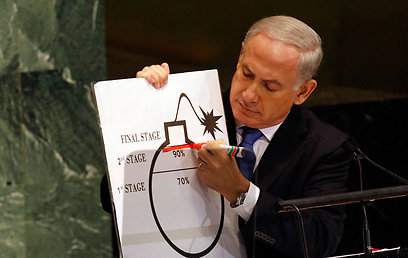 As soon as Iran will have stockpiled some 260 kilograms (573 pounds) of uranium refined to 20% purity level they will be able to immediately move on to the final stage (enriching the same amount to 93%). With 260 kilos of 20% material it would take Iran a few weeks to two months to produce 26-28 kilos (57-62 pounds) of uranium enriched to 93%, which can be used to build one nuclear warhead.

Netanyahu justifiably claims that the moment Iran obtains the capability to produce enough weapons-grade material for one atomic bomb no one will be able to stop its nuclear program. Therefore, as soon as Iran amasses enough 20% enriched uranium to build one bomb it will be on the brink of becoming a nuclear power. Netanyahu told the UN that Iran must not be allowed to reach this point.

The Americans have a "red line" of their own. Obama is refraining from addressing it publicly, but sources in Washington know full well where it crosses. This line is more complex, and it will be crossed once Iranian Supreme Leader Khamenei will give the order to begin producing a nuclear weapon.

The difference between Netanyahu's "red line" and the American "red line" is clear. Now Netanyahu is telling the Americans: 'Let's talk and work out our differences until we secretly agree on the point in which there will be no other choice but to attack Iran.' The Israeli leader has clarified that he wants to move these discussions to a secret channel of communication in order to end the dispute with Obama and keep the Iranians in the dark. In any case, the Iranians will not reach Netanyahu's "red line" before the US elections, so the critical developments in the nuclear face-off will likely take place only during the winter months. Then we will know what the Iranians' plans are and if Israel and the US have agreed on a "red line." It is doubtful, however, that Netanyahu fully achieved the third goal - moving Israel out of its diplomatic isolation in the West. It is difficult to argue with his insights into the "great battle" between modern and medieval forces in our region, but the tone of his voice and the way in which he presented Israel as a beacon of democracy and progress surrounded by backward forces was condescending and did not improve our position in the region. Having said that, it was wise of Netanyahu not fall into the trap set for him by Palestinian President Mahmoud Abbas, who in his speech linked the 'price tag' acts to settlement construction and urged the UN to stop what he referred to as Israel's "campaign of ethnic cleansing against the Palestinian people via the demolition of their homes."