The Sudanese minister who accused Israel of carrying out an aerial strike on a weapons factory near Khartoum apparently knew what he was talking about. He showed journalists a video of a huge crater next to two destroyed buildings and what appeared to be a rocket lying on the ground.

Of course, the crater could have been the result of a work accident that set off explosives at the site. And the rocket, which may have been produced locally, could have exploded during the fire. But additional circumstantial evidence supports the Sudanese minister's claim that Israel was involved. Witnesses testified to seeing jets fly over the area at dawn and, most importantly, the minister knows full well that Israel had a motive to attack the arms factory.
Nuclear Crisis
The Iranian bluff
Alex Fishman
Op-ed: Tehran seeks dialogue with West as its military threat gradually diminishes
The Iranian bluff
This factory, which is situated inside a military compound near Khartoum and manufactures various types of rockets and light weapons, was constructed with Iran's assistance some four years ago in the framework of a cooperation agreement between the two 'pariah' states. Sudan is isolated from the international community due to the genocide in Darfur, and the West has imposed crippling sanctions against Iran over its nuclear program. Both governments have an interest (or at least had one until recently) in transferring arms to Hamas in Gaza. The factory's name, "Yarmouk," also alludes to the identity of its Palestinian "clients." As part of the deal, the Sudanese earned money and apparently received weapons, while the Iranians shortened the supply routes to Hamas in Gaza, Hezbollah in Lebanon and perhaps even to Syria, thus decreasing the risk of Israeli attacks on arms convoys – or so they thought at the time. 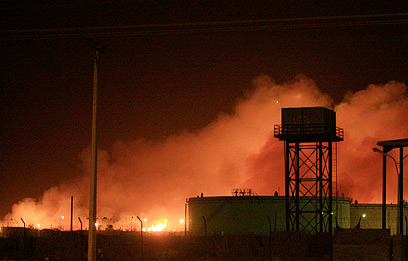 If the Sudanese minister's claim that four Israeli warplanes bombed the arms factory is true, then this was an impressive display of the IDF's long strategic arm. But let's not get carried away. The Israeli Air Force proved 27 years ago that it can successfully attack targets located over 1,500 kilometers away.

In 1985 Israeli jets bombed the PLO headquarters in Tunis, but the fact that the target was situated near the coast helped Israeli forces approach it undetected. Khartoum, on the other hand, is located deep inside Sudanese territory and is surrounded by numerous radar facilities. The Sudanese minister said Israeli planes used electronic countermeasures to avoid detection by Sudanese air defenses, but experts say they could have flown over "dead areas" where they could not be detected by radars. In any case, the Sudanese cannot prove Israel attacked the arms factory. However, if Israeli jets did carry out the strike, it means it took place some 1,600 kilometers from Israel, nearly the same distance between central Israel and the uranium enrichment plants in Iran – one near the city of Kashan ("Natanz") and the other near Qom ("Fordo"). Therefore, the attack, if it was carried out by Israel, also sent a strong message to Tehran.

Until now the Iranians did not take Israel's threats seriously. They did not believe Israel had the ability to attack its nuclear installations or that the Israeli government would have the courage to risk losing dozens of pilots and planes. But now, after the attack in Sudan and the bombing of a Syrian reactor in 2007, which foreign media attributed to Israel, the Iranians may reassess Netanyahu and Barak's seriousness when they declare that "all options are on the table."

There is no doubt that the explosions at the Sudanese arms factory have given elements in Khartoum, Gaza and Tehran something to think about.