Op-ed: Palestinians, who refused 90% of land they demand, not real peace partners

Allow me to make what should be an obvious statement: The two-state solution is dead, has been for quite a while. For years the general thinking was the Arabs favored the two-state solution, while Israel was against it. However in the 2000 Camp David ll negotiations there was a shift of significant proportions.

Then Prime Minister (now Defense Minister) Ehud Barak offered more than 90% of Judea and Samaria (commonly known as the West Bank). He was also willing to divide Jerusalem. In the end Yasser Arafat rejected it, because he refused to settle for anything less than 100% of his demands. These included Muslim control over the Old City of Jerusalem, the site of Judaism's most sacred places - the Western Wall and Temple Mount. This would deny Jewish access, as was the case for almost 1900 years until 1967.

It was once said that Arafat never missed an opportunity to miss an opportunity. Camp David ll was seen by many as the greatest of his "missed opportunities."
Stalled Talks
Cold peace better than nothing
Ron Ben-Yishai
Part 2 of analysis: A few Israeli concessions, gestures to Abbas enough to jumpstart peace talks
Cold peace better than nothing
However, two critical elements emerged from Camp David ll: First, Israel was willing to pay a high price for peace by accepting a hostile Arab state next to the most densely populated section of the country, placing several million Israeli civilians within range of rockets. One could easily define this as a "bold sacrifice for peace," which many western leaders often demand of Israel. The second critical element which emerged is the Arabs refused to accept anything less than 100% of their demands.

Since then, Prime Minister Ehud Olmert made an offer more generous than Barak's. It was also rejected. Current Prime Minister Netanyahu has said he would accept an Arab state. Again, rejection. In fact Mahmoud Abbas has not only rejected the offer, on several occasions he stated he will never accept Israel as a Jewish state, even if the Arabs get their own state. Just recently in an open letter to Gazans he referred to 100% of Israel, as "occupied Palestine." 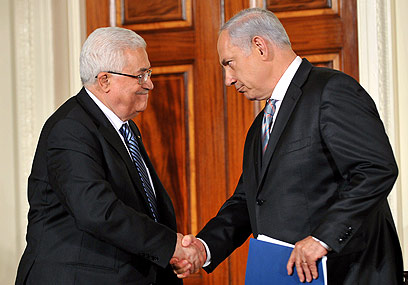 Thus, with at least three Israeli PMs willing to accept a Palestinian state, based on a negotiated settlement, it's clear Israel is not standing in the way of a two state solution. It's the Arabs. Yet we continue to hear calls for it, as well as criticism of Israel from world leaders for not doing enough to bring it about.

Hence the question, isn't the fundamental premise of negotiations based on compromise? This suggests each party is expected to show flexibility in order to facilitate an agreement. By Israel's willingness to give up over 90% of the land demanded by the Arabs, they are clearly doing their part. It's the Arabs who refuse to compromise. In fact, Mahmoud Abbas has made demands which he requires be met before face to face negotiations take place. His thinking renders the very concept of "negotiations" meaningless. For those who still wish to pursue a two-state solution, may I suggest their efforts be directed at those who have been steadily killing it - the Arabs.

Moreover, to set the record straight, the two-state solution is not unique. One has already been attempted. UN resolution 181 passed in 1947 by a 72% majority, apportioned one Jewish and one Arab state. Every Arab country voted against it. Not only that, the day after Israel declared independence in May 1948 five Arab countries attacked, trying to destroy it. The names of the players have changed since then, however the game remains the same - a Jewish state of Israel is unacceptable.

Today there are 22 Arab countries, with a combined population of over 370 million in the Middle East. The overwhelming majority are openly hostile toward Israel. Conversely, Israel is the size of New Jersey with roughly six million Jews. If the Palestinians refuse to accept over 90% of the land they demand, plus reject Israel's right to exist as a Jewish state, the time has come to speak bluntly.

The Palestinians leadership has a singular goal of Israel's destruction. This is confirmed in the charters of Hamas (articles 6, 7, 13 & 15), the PLO (articles 9, 15, 21) and Fatah (articles 9, 12, 17 & 19). The charters also require the Jews return to subjugation under Muslim rule, as was the case for centuries prior to Israel's rebirth in 1948. Absent of good faith or willingness to compromise, the Palestinians don't deserve to be viewed as serious peace partners.

Given Abbas' statements that he will never accept a Jewish state, and that he considers all of Israel "occupied" Palestine, maybe his two-state solution doesn't include Israel. Could it be his two states are Jordan and Palestine?

With the two-state solution clearly dead, I unapologetically invite those who continue to pursue it to its long overdue funeral. It should be presided over by Mahmoud Abbas, along with representatives from Hamas, Hezbollah, the PLO and the rest of the Arab world, since they, not Israel, are responsible for its death. All pragmatists are invited.