The results of the US elections will not have existential consequences for us. Obama and Romney, as well as the institutions behind their campaigns, are deeply committed to the State of Israel and its people, and this is what will eventually determine Washington's military and diplomatic policies vis-à-vis the Jewish state. However, from Israel's perspective, a second Obama term in the White House would be preferable to a first Romney term.

Point of view
Romney is good for Israel
Shoula Romano Horing
Op-ed: Statements given in private show Republican candidate truly understands Israeli-Palestinian conflict
Romney is good for Israel
While second-term presidents are not as sensitive to the so-called "Jewish vote," this applies mainly to Republican presidents, who are not as dependent on it. Any Democratic president will be wary not to lose the traditional support of the majority of American Jews for the Democratic Party. If reelected on Tuesday, Obama will also act according to this notion. His Mideast policy will be greatly influenced by positions of America's Jews – certainly by those who support his party. During my two stints as Yedioth Ahronoth's correspondent in Washington I got the impression an experienced president is better for Israel than a rookie president. Israel will pay a price until the rookie president formulates a realistic Mideast policy. Obama made some terrible mistakes with regards to the US' conduct vis-à-vis Iran, as well as its handling of the Palestinian issue and the crises related to the "Arab Spring" - but the president and his administration drew the necessary lessons and implemented them. Romney, on the other hand, lacks experience in the international arena, including the Middle East. It would take a long time for Romney and his administration to learn how to deal with Iran's delay tactics, the Saudis' double talk and Erdogan's neo-Ottoman lust for respect. If elected, it is safe to assume that Romney will recruit to his government senior officials from George W. Bush's administration, in keeping with the revolving door policy. The Bush administration's Mideast policy led to the loss of eight precious years in the battle against Iran's military nuclear program – years that were wasted on the war in Iraq. The Bush administration also made a significant contribution to the fact that Hamas took over Gaza and threatens to seize power in the West Bank as well. History has taught us that Republican adminsitraitons, due to the traditional support of the American Jewish community for the Democratic Party, tend not to be overly attentive to Israel's wishes and statements. For example, President George W. Bush did not authorize the sale to Israel of weapons systems that would make an attack on Iran possible. Obama has already provided us with these aerial weapons systems.

After one or two years in the White House, Romney's Mideast policy will probably be no different than Obama's – apart from the Palestinian issue maybe. Perhaps, when all is said and done, every American president operates only with the US' interests in mind. 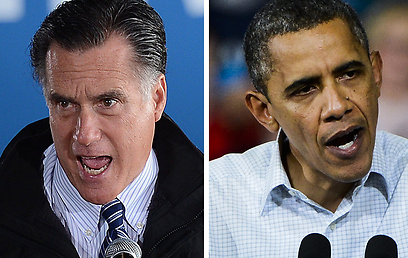 Romney may even turn out to be more lenient toward Iran than Obama, who has already declared that the US will not allow a nuclear Iran. Romney made similar remarks during the election campaign, but there is a difference between official presidential statements and election campaign slogans. Obama's threat is more credible, in part because he has already used military force with significant success.

The military aid to Israel is just one aspect of the US' contribution to the security of the Jewish state. This aspect can be measured, but it is not the most important. What contributes most to the security of the State of Israel and its citizens is the unwritten alliance between the American and Israeli people. The very existence of this alliance at a time when the US' economic situation and international status are sound has boosted Israel's deterrence.

This alliance has also been at the basis of Washington's foreign policy, which successfully intercepts the efforets in the international arena to delegitimize Israel. Without the "diplomatic Iron Dome" provided by the US, it is possible that the UN would have already impoised economc sanctions against Israel over the settlements. Our ability to use military force to defend ourselves would have been hurt as well.

The unwritten alliance between the American and Israeli people constantly grows stronger and is not affected by the relationships between certain US and Israeli leaders and governments at least as long as the Western world continues to view us as a true democracy.

Therefore, we should not make too much of the personal antagonism between Obama and Netanyahu over what is perceived as the Israeli premier's intervention in the US elections in favor of Romney. In terms of the practical relations between Israel and its powerful patron, there will not be a major difference between Obama and Romney's policies, also due to the fact that Congress has traditionally been a stronghold of near-unconditional support for Israel.

If, for example, Obama will want to "take his revenge" on Netanyahu, as some people predict, the Republican-controlled House that will stop him.

In general, it is important to recognize the fact that a president who is good for America is also good for Israel. Therefore, we should hope that the next president will help the US recover from the financial crisis and boost its standing in the Middle East, which has significantly declined. In this regard, it appears that Obama's chances to succeed are greater than Romney's.

At least Obama has a recovery plan for the American market as well as a plan for social reform. He has already started implementing these plans with a moderate level of success. Romney has yet to present a consolidated economic plan, only a series of principles that coincide with the Republicans' "free market" ideology. It is not all certain that Romney has an economic plan.

The same goes for the US' Middle East policy. Obama has already put in place unprecedented sanctions against Iran; he is restraining Egypt and dealing well with the Syrian crisis. Romney, on the other hand, is making rather hollow statements, except when it comes to the Palestinian issue. Romney will apparently try to bury this issue, in accordance with the policies of Netanyahu, Lieberman and Sheldon Adelson – their joint donator.

This means that the chances for a permanent or even an interim agreement between Israel and the Palestinians will be significantly reduced. Obama will most likely try to carefully end the diplomatic stalemate and promote an agreement that would prevent the establishment of a bi-national state between the Jordan River and the sea. This is another reason why Israel should prefer him over Romney.