Romney is good for Israel

A secretly taped video of the Republican presidential candidate which was recently released shows how great a friend Romney will be to Israel if elected.

Voters cannot judge public statements by presidential candidates because they have the inclination to lie about their true intentions. Everyone remembers the infamous open microphone incident in which President Obama and French President Sarkozy were overheard in a private conversation ridiculing as a "liar" Israeli Prime Minister Netanyahu at a G20 summit last November. This is why it was refreshing to read that, contrary to Obama statements given in private, Romney in private truly understands the Israeli- Palestinian conflict and is sympathetic to Israel’s security concerns.
American President
Obama's anti-Israel agenda
Dan Calic
Op-ed: Pre-election polls sad reflection of how unimportant Israel is to majority of US Jews
Obama's anti-Israel agenda

What does the video tape reveal about Romney’s true beliefs about Israel and the Middle East?

Romney believes that that in the near future "peace is not possible in the Middle East between the Israelis and the Palestinians" and that "the pathway to peace is almost unthinkable to accomplish."

While Obama believes that a diplomatic settlement is possible if Israel will agree to give away all its strategic assets by withdrawing to the 1967 borders, Romney believes, like the majority of Israelis, that the best strategy for Israel is keeping the status quo and trying to manage and contain the conflict till conditions change in the Middle East.

In the videotape Romney said, "You move things along the best way you can. You hope for some degree of stability, but you recognize that this is going to remain an unsolved problem. We live with it in China and Taiwan. All right, we have a potentially volatile situation but we sort of live with it, and we kick the ball down the field and hope that ultimately somehow, something will happen and resolve it." 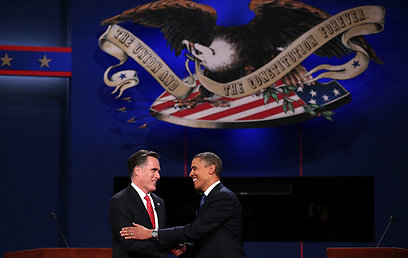 Romney puts the blame for the lack of peace squarely on the Palestinians, while Obama for the last four years has put the blame on Israel’s settlement policy and the close relationship between Israel and the US. Romney stated in the video tape that "the Palestinians have no interest whatever in establishing peace” and "are committed to the destruction and elimination of Israel."

In contrast, during a private meeting between Obama and a dozen Jewish leaders in the White house, on July 13, 2009, the president was quoted as saying "look at the past eight years (President George W. Bush’s two terms). During those eight years, there was no space between US and Israel and what did we get from that? When there is no daylight, Israel just sits on the sidelines and that erodes our credibility with the Arab states."

Consequently, Romney does not agree with the Obama strategy of pressuring Israel to agree to the Palestinians’ preconditions to start negotiations, such as a settlement freeze. Romney commented that "the idea of pushing the Israelis to give something up to get the Palestinians to act is the worst idea in the world.”

While Obama supporters blame Israel in recent weeks of trying to push the US into a war for its own interests, Romney understands that a nuclear Iran is also dangerous to the US. Romney in the videotape stated “imagine Iran giving Hezbollah a little fissile material, ordering the proxy to take it to Chicago, and then blackmailing the US over foreign policy issues.”

Those voters who have doubts about Obama commitment to Israel should rest assured that Israel under Romney will fare much better.

Shoula Romano Horing was born and raised in Israel. She is an attorney in Kansas City. Her blog: www.shoularomanohoring.com