Lapid sets agenda for next government

The aftermath of Tuesday's elections found most party leaders uncertain about their role in the next coalition. Prime Minister Benjamin Netanyahu may well be the one tasked with forming the next government but Yair Lapid's amazing achievement is set to complicate matters for the veteran politician.

The Yesh Atid chairman has in fact managed to set the agenda for the next government – a demand for equal share of the burden.

One of Netanyahu's possible partners is Habayit Hayehudi chairman Naftali Bennett whose party won 11 Knesset seats. "There is a real chance to form a government that will work towards true equal share of the burden," he told Ynet on Wednesday morning.

"I'm thrilled we have a historic chance to look out for the middle class. We're only at the beginning of the road. " 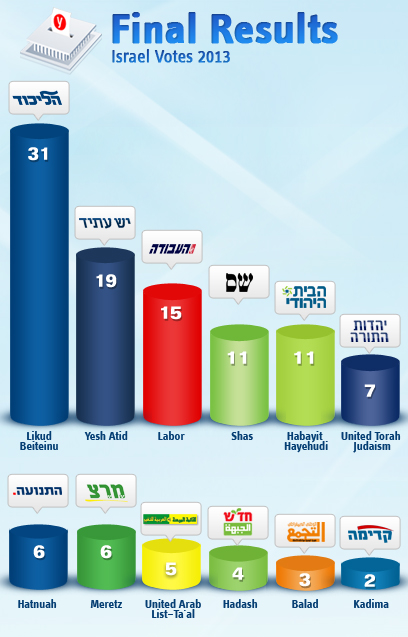 Commenting on Lapid's achievement, Bennett said, "The public went for something new, both Yair Lapid and us are new. The public is now waiting to see the results and our commitment is to restore the economy and take care of equal share of the burden."

The Habayit Hayehudi chairman expressed satisfaction at his party's performance noting "a 400% increase" in Knesset seats. "I am very happy with the growth of religious Zionism," he declared.

Bennett was not the only one to mention the issue of equal share of the burden. Sources at Tzipi Livni's Hatnua, which won a disappointing six mandates, said that the issue of participation in the army will be one of the party's terms to joining the coalition. "It's safe to say that she's done with sitting in the opposition but it won’t be at any cost. A government with Livni in it will have more legitimacy, longevity and stability," one source said.

Asked about their poor performance in the elections, the source said that Lapid had gained votes by refusing to join a united centrist bloc. "We were the target of fierce attacks from all parties. In any case, Lapid would also benefit from joining the government together with Livni." Indeed the big winner of the elections was the Yesh Atid chairman. Sources at the party, who are still celebrating their massive success at the polls, stressed Yesh Atid is not locked into the coalition just yet. "There's a sense of satisfaction but also of great responsibility," said Yaakov Peri, no. 5 on Lapid's list. "We made a promise and we intend to meet our commitment to the voters." Peri said the party is not concerned with trading seats and portfolios. "We have a platform which we've worked on for more than a year and it highlights the issue of equal share of the burden, the cost of living and housing."

Commenting on Lapid's conversation with Netanyahu immediately after the results came in, he said: "It would be a mistake to think that we're already locked into the coalition. What will guide us are our promises to the voters, nothing else. We would like to raise the issue of the middle class." Meanwhile, the Likud-Beiteinu are still trying to make sense of their failure having lost 11 seats. Yisrael Beiteinu chairman Avigdor Lieberman posted a message on his Facebook page which read, "We'll form the next government headed by Benjamin Netanyahu."

"We shall continue to lead Israel with responsibility and security. The elections force the next government to focus on internal matters, and mainly equal share of the burden, changing the form of government and affordable housing. On the diplomatic level, if the Palestinians show they are willing to meet and restart negotiations we would be happy to meet with them, with no preconditions." Both the Likud and the Labor were disappointed with their results. Led by Shelly Yachimovich, the Labor party won only 15 Knesset seats.

MK Eitan Cabel expressed his bitter disappointment in Ynet's studio on Wednesday morning. "I feel real pain," he said but added he does not expect Yachimovich to resign. "We shall convene and decide where to go next."