In his most inflammatory speech since anti-government demonstrations erupted, Turkish leader accuses 'looters and vandals' of insulting women wearing headscarves, entering mosque with their beer bottles, shoes; police use tear gas against protesters in capital

Turkish Prime Minister Recep Tayyip Erdogan, facing the biggest protests of his tenure, called on his supporters to prepare for pro-government rallies next weekend in Istanbul and Ankara, as riot police fired tear gas and water cannon to clear protesters from an Ankara square.

"On Saturday, are you ready for a big Ankara meeting? ... The next day we will have the Istanbul meeting," Erdogan said to cheering crowds in Ankara, as riot police moved in against protesters just a few kilometers away.

In a series of increasingly belligerent speeches to cheering supporters Sunday, Turkey's prime minister launched a verbal attack on the tens of thousands of anti-government protesters who flooded the streets for a 10th day, accusing them of creating an environment of terror.

Erdogan made the most inflammatory of his speeches as he arrived in the capital, Ankara. Erdogan belittled the protesters, again calling them "capulcu," the Turkish word for looters or vandals. He made his speech in Ankara on an open-top bus, which then drove into the city in a motorcade. 'All they do is to break and destroy.' Erdogan in Ankara (Photo: AP)

"If you look in the dictionary, you will see how right a description this is," Erdogan said, speaking to thousands of supporters who greeted him at the airport. "Those who burn and destroy are called capulcu. Those who back them are of the same family."

The increasingly fiery tone could inflame tensions, with protesters in both Ankara and the country's largest city, Istanbul, remaining on the streets. Protests have been held in at least 78 cities across the country so far. On two occasions, including one in the southern city of Adana Saturday night, clashes have been reported between Erdogan supporters and protesters. "All they do is to break and destroy, to attack public buildings ... They didn't stop at that," Erdogan said. "They attacked daughters who wear headscarves. They entered Dolmabahce mosque with their beer bottles and their shoes."

Addressing crowds of cheering followers at Ankara airport, Erdogan said "with our government, our party and most importantly our nation, it is we who have defended, and are most strongly defending democracy, law and freedoms," he told crowds chanting slogans including "We are ready to sacrifice our lives for you Tayyip".

"We were patient, we will be patient, but there is an end to patience," he said, to chants of "Rich people of Istanbul, evacuate Gezi Park immediately".

Some of the injured in the initial clashes in Istanbul's Besiktas area were treated in Dolmabahce mosque. The mosque's imam has denied reports that people entered with beer. In the initial days of the protests, some women said they were harassed verbally. The majority of protesters however, have denounced those who did it and have been welcoming toward them.

Anti-government protesters have turned Erdogan's label of them as "capulcu" into a humorous retort, printing stickers with the word, scrawling it on their tents and uploading music videos onto social network sites.

Erdogan had earlier visited another two cities where unrest had occurred and made speeches again condemning his detractors. He planned more speeches in a day that looked much like an election candidate on the campaign trail. 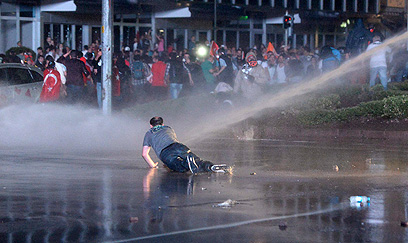 After the speech, crowds at Istanbul's Taksim Square swelled, with several tens of thousands packing into the square. Thousands more flooded Ankara's central square, a day after police used tear gas and water cannons to oust them from the area.

Erdogan's refusal to moderate his tone caused dismay. "As the prime minister continues (with) his harsh style, the resistance also continues and is getting bigger," said Cagdas Ersoy, a 23-year-old student who joined the protests in Ankara's Kizilay square. "He is making the resistance bigger without realizing it." Protester Cihan Akburun said: "He should not provoke the people. We invite everyone to (have) common sense." Erdogan challenged the protesters as the ballot box. "It's not these marginal groups, but the people, who are going to call us to account, and they are going to do it at the ballot box. The people brought us here (through elections) and it's the people who will vote us out. Apart from the people, no one has the power to oust us," he said. "Stand firm, don't yield, Turkey is with you," his supporters chanted in return. The nationwide anti-government protests were sparked by outrage over police use of force against an environmental protest in Istanbul's Taksim Square on May 31, and have grown into a display of discontent toward Erdogan's government. The protests have attracted a diverse crowd from a variety of social backgrounds and age groups. Many accuse the prime minister of becoming increasingly authoritarian after 10 years in power and of trying to impose his conservative, religious mores in the country which is governed by secular laws. Erdogan has rejected the accusations, insisting he respects all lifestyles and is the "servant" of his people. Three people have died in the protests, including a police officer in Adana who fell into an underpass that was under construction while chasing demonstrators. More than 4,300 protesters have sought medical treatment, human rights groups have said. Thousands of protesters have occupied Taksim and its Gezi Park, where the protests began over objections to Erdogan's plan to develop the park by building a replica Ottoman barracks and a shopping mall. The mall idea has since been dropped, and has been replaced by possibilities of an opera house, theater and museum. Erdogan, referring to the crowd of thousands of supporters before him, said: "The whole of Turkey should look at Ankara. They should not look at those who are wreaking terrorism." He again made obscure references to an "interest rates lobby" as being involved in the protests, saying that they would be made to account "heavily." For those who might speculate on the financial markets, he said: "If we catch you speculating, we will strangle you." The prime minister accused the anti-government protesters of killing policemen and said hundreds of police had been injured. So far, only one police death has been confirmed officially - that of the officer who fell into the underpass. Earlier in the day, he gave a speech in Adana, where pro- and anti-government protesters clashed Saturday night, according to the state-run Anadolu Agency. "We won't do what a handful of looters have done. They burn and destroy. ... They destroy the shops of civilians. They destroy the cars of civilians," he told supporters at Adana airport. "They are low enough to insult the prime minister of this country."

He urged his supporters to avoid violence themselves and predicted that his Islamic-rooted party would defeat his opponents during local elections in March.

"I want you to give them the first lesson through democratic means in the ballot box," he said.

Erdogan has repeatedly branded the protests as illegal efforts to discredit his government before local elections next year. He frequently refers to the 50% majority he received in elections in 2011 to dismiss the protest as attempts by a minority group to dominate over a majority of his supporters.