Kadir Topbas says 'we are definitely not thinking of building a shopping mall' at Gezi Park, the symbolic heart of nationwide protest movement; tens of thousands of Turks defied Erdogan's call for immediate end to anti-government demonstrations

A small Istanbul park whose conservation fight sparked mass protests will not be turned into a shopping mall, the city's mayor assured protesters Friday, but insisted the site's controversial redevelopment would go ahead.

"We are definitely not thinking of building a shopping mall there, no hotel or residence either. It can be... a city museum or an exhibition center," Istanbul mayor Kadir Topbas told reporters.

Activists have been trying to halt plans to demolish the park to make way for a replica of Ottoman-era military barracks and, some protesters feared, a shopping center. 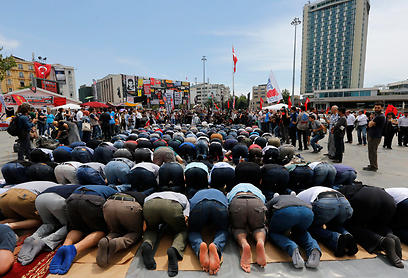 A campaign to protect Gezi Park's 600 trees, the last patch of green in the heart of the Turkey's largest city, was met with a violent police crackdown last week, triggering anti-government demos across the country that have left thousands injured by police using tear gas and water cannon.

Turkey's Prime Recep Tayyip Erdogan has responded with defiance, vowing to press on with the barracks project but leaving open whether the area would become a shopping district. In a more conciliatory tone, Topbas said the final plans would be made "through dialogue" and "the number of trees can be increased." But he stood firm on the overall project: "The plan for the barracks was part of our election promises; the people gave us the authority to do it."

The park, next to Istanbul's main Taksim Square, has become the symbolic heart of the nationwide protest movement and has transformed into a festival-like camp site packed with mostly young demonstrators.

Meanwhile, Erdogan's ruling Justice and Development (AK) Party said there was no question of calling early elections after a week of the fiercest anti-government protests in decades. "Local elections will be held in March 2014, presidential elections in August 2014, and general elections in June 2015, and a change in the schedule is out of the question," Deputy Chairman Huseyin Celik told reporters on Saturday after a meeting of the AK Party's executive committee.

A few kilometers away, tens of thousands of Turks defied Erdogan's call on Friday for an immediate end to anti-government demonstrations, massing again in the central Taksim Square, where riot police backed by helicopters and armored vehicles first clashed with protesters a week ago.

Tourists and curious locals swelled their numbers around a makeshift protest camp in Gezi Park, a leafy corner of the square where activists have been sleeping in tents and vandalized buses, or wrapped in blankets under plane trees.

What began as a campaign against government plans to build over the park spiralled into an unprecedented display of public anger over the perceived authoritarianism of Erdogan and his Islamist-rooted AK Party, leading to the worst riots in decades.

In a rare show of unity, thousands of fans from Istanbul's three main football clubs Besiktas, Galatasaray and Fenerbahce, who have helped organize some of the protests, marched on Taksim roaring "Tayyip resign!" and "Arm in arm against fascism!".

Police fired teargas and water cannon on protesters overnight in the working-class Gazi neighborhood of Istanbul, which saw heavy clashes with police in the 1990s. There was similar unrest night after night earlier in the week in several cities, leaving three dead and close to 5,000 injured.

Hundreds of protesters also gathered in the center of the capital Ankara on Saturday, which saw violent clashes earlier in the week, chanting and honking car horns.

Erdogan has given no indication of plans to clear out Taksim, around which protesters have built dozens of barricades made of ripped up paving stones, street signs, vandalized vehicles and corrugated iron, clogging part of the city centre.

Police pulled back from the square days ago.

"Let them attack. They can't stop us," a member of the Turkish Communist Party shouted through loudspeakers to a cheering crowd from on top of a white van in the square.

Taksim is lined by luxury hotels that should be doing a roaring trade as the summer season starts in one of the world's most-visited cities. But a forced eviction might trigger a repeat of the clashes seen earlier in the week.