US says it can be 'willing partner' with Iran

After taking oath of office, Rohani says 'if you want the right response, don't speak with Iran in the language of sanctions.' White House: Rohani inauguration presents opportunity for Iran to ally West's 'deep concerns' over nuclear program

Iranian President Hassan Rohani picked a cabinet of experienced technocrats as he took the oath of office on Sunday, saying he hoped confidence-building with foreign powers would help resolve the nuclear dispute and ease international sanctions.

Since his election by a wide margin over conservative rivals in June, many inside and outside Iran have pinned their hopes of a diplomatic resolution to the dispute over Tehran's nuclear program on Rohani, a cleric whose watch-word is moderation, but who is still very much an Islamic Republic insider.

"The only way for interaction with Iran is dialogue on an equal footing, confidence-building and mutual respect as well as reducing antagonism and aggression," Rohani said in a speech after taking the oath of office in parliament.

"If you want the right response, don't speak with Iran in the language of sanctions, speak in the language of respect." Signaling his wish to get straight down to work, Rohani immediately presented his list of cabinet nominees to the parliament speaker even though he has two weeks to do so. Parliament must approve the proposed ministers before they can take office. The speaker said the assembly would review the nominees in the next week. Rohani picked Iran's former ambassador to the United Nations, Mohammad Javad Zarif, as foreign minister. Zarif is a respected diplomat, well known to top US officials including Vice President Joe Biden and Defense Secretary Chuck Hagel. Western envoys familiar with Zarif have expressed hope that his appointment may be a sign of Rohani's interest in breaking the deadlock between Iran and the United States. 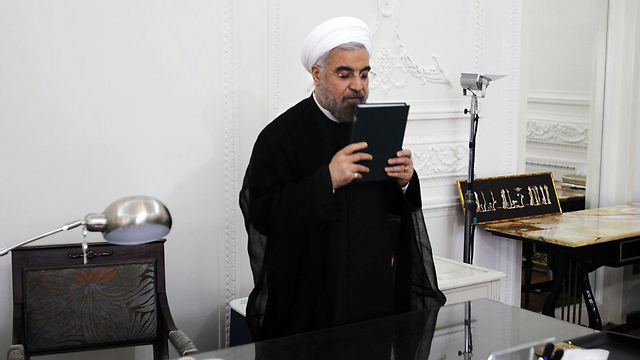 "Zarif's sui generis skills allow him to bridge the great gulf of misperceptions between Iran and the West in his very person," said Ali Vaez, Iran analyst at the International Crisis Group.

"No one else is better suited to take on the grim but grand task of ending Iran's isolation at this time of national peril," he told Reuters. Any new overtures to the West would have to be approved by Ayatollah Ali Khamenei, who has maintained a staunchly anti-Western stance since becoming Iran's supreme leader in 1989. Rohani chose Bijan Zanganeh to return to the post of oil minister which he held from 1997 to 2005. Though he worked under the reformist government of former President Mohammad Khatami, Zanganeh is a non-partisan technocrat thought to enjoy the protection of Khamenei. As oil minister, Zanganeh helped attract billions of dollars of foreign investment into Iran's vital oil and gas sector, but that was before the imposition of stringent sanctions on the industry. Ali Tayyeb-Nia, Rohani's choice to head the Ministry of Economy, has held government positions during the presidencies of reformist Khatami, centrist Akbar Hashemi Rafsanjani and conservative Mahmoud Ahmadinejad. Tayyeb-Nia is an economist who has specialized in the study of inflation, which Rohani said last month stood at 42% and which must be reduced to bring a measure of economic relief to Iranians.

The White House said Sunday it hopes Iran's new president will "heed the will" of the voters and make choices that will "lead to a better life" for Iranians.

"The inauguration of President Rohani presents an opportunity for Iran to act quickly to resolve the international community’s deep concerns over Iran’s nuclear program. Should this new government choose to engage substantively and seriously to meet its international obligations and find a peaceful solution to this issue, it will find a willing partner in the United States."