Iran's newly elected president pledged Monday to follow a "path of moderation" and promised greater openness over the country's nuclear program, emphasizing messages from Western leaders since his victory that have brought cautious hope of new openings with Tehran.

Hassan Rohani used his first news conference since Friday's election to sketch out views that are likely to be further welcomed in the West as possible opportunities to ease tensions, led by those stemming from Tehran's disputed nuclear program.

But he said he would not support halting Iran's uranium enrichment, which is a key stumbling block on talks between Iran and world powers.

Iran's president-elect said the United States must recognize Iran's nuclear rights and pledge not to interfere in its internal affairs before direct talks between the two countries can take place.

"The issue of relations between Iran and America is a complicated and difficult issue," Rohani said. "It is an old wound that needs to be ... healed." 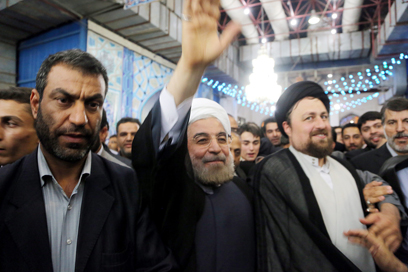 He also sidestepped the issue of Iran's close alliance with Syria's Bashar Assad, saying that the efforts to end the civil war and restore stability rest with the "Syrian people."

But Iran's president does not have authority to set major policies such as the direction of the nuclear program or relations with the West. All such decisions rest with the ruling clerics and the powerful Revolutionary Guard, which have so far appeared to embrace Rohani.

Rohani, however, can use the strength of his landslide victory and his influential connections, including former President Akbar Hashemi Rafsanjani, to try to sway policies. He also will serve as Iran's main international envoy and is almost certain to present a different tone than his combative predecessor, Mahmoud Ahmadinejad, who formally gives up power in August.

Rohani described his election as opening a "new era" and said he would "follow the path of moderation and justice, not extremism."

"We have to enhance mutual trust between Iran and other countries," he said. "We have to build trust."

He also said dealing with the economy was among his priorities, in a clear reference to how Western sanctions over Iran's nuclear efforts have helped spike inflation to more than 30% and slashed vital revenue. Previously, Rohani - a former nuclear negotiator - has criticized Iranian positions that have led to increased sanctions, but he also described the pressures by the US and others as "oppressive."

"The Iranian nation has done nothing to deserve sanctions. The works it has done has been within international frameworks. If sanctions have any benefits, it will only benefit Israel. It has no benefits for others," he said.

He promised to encourage "step by step" measures to reassure the West over Iran's nuclear ambitions.

The West claims that Iran is seeking a nuclear weapon. Iranian leaders, including Rohani, insist Iran seek reactors only for energy and medical applications.

"The second step is promoting mutual confidence. We'll take measures in both fields. The first step is that no new sanctions are imposed. Then, the (existing) sanctions are reduced."

On Syria, he said the ultimate responsibility to resolve the more than two-year-old civil war should be in the hands of the "Syrian people."

"We are opposed to foreign intervention," he said. "We hope peace and tranquility will return to Syria through the cooperation with countries of the region and world."