The men, women and children lying undisturbed in their beds had looked so peaceful they might have been just sleeping, Abu Nidal thought, as he and other rescuers dragged their bodies into the street.

His was one of many accounts of a massive assault on the eastern suburbs of Damascus that activists say killed more than 500 people on Wednesday morning. They say some of the bombs were loaded with chemical agent, which would make it the worst chemical attack since Syria's two-year conflict began.

"We would go into a house and everything was in its place, every person was in their place. They were lying where they had been. They looked like they were asleep. But they were dead," he told Reuters by Skype from the suburb of Erbin.

Some first responders found it surprising that either President Bashar Assad's forces or the rebels trying to topple him would carry out such an attack just days after a United Nations team arrived in the capital to inspect previous reports of chemical weapons use. The UN investigators are staying in a hotel just a few kilometers away.
X

It has been difficult to confirm previous reports of chemical attacks or determine responsibility, with no experts able to examine the scene.

When shelling hit her town of Mouadamiya, southwest of the capital, Farah al-Shami ignored the rumors on Facebook that rockets were loaded with chemical agents. She thought her district was too close to a military encampment to be affected. "And at the same time the UN was here. It seemed impossible. But then I started to feel dizzy. I was choking and my eyes were burning," the 23-year-old said, speaking by Skype. "I rushed to the field clinic nearby. Luckily no one in my family was hurt, but I saw entire families on the floor." 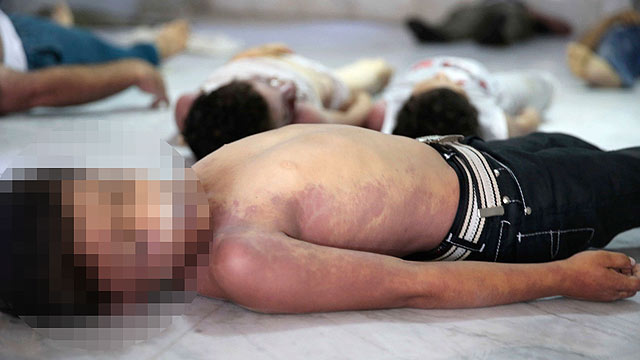 Reuters was unable to verify witness accounts. Doctors interviewed in the area describe symptoms they believe point to sarin gas, one of the agents Western powers accuse Damascus of having in an undeclared chemical weapons stockpile.

The government denies having such weapons and says that if it did posses them, it would not use them against other Syrians. It repeated those statements again on Wednesday, calling the reports of the gas attack "fabrications". Videos uploaded from the suburbs of the rebel stronghold outside the capital, known as Eastern Ghouta, show similar scenes of small children convulsing on the floor, foaming at the nose and mouth. Some show rows of men, women and children - pale but with no signs of injury - laid out for burial. 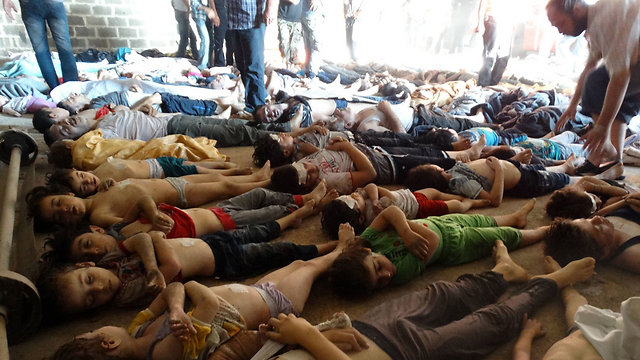 Abu Nidal said the alleged chemical strike took some of the first responders by surprise, too, when the first round of rockets hit between 2:20 and 2:40 am.

"We saw men collapsed on staircases and in doorways. It looks like they were trying to go in and help and then were affected themselves. Some of them were dead," he said. 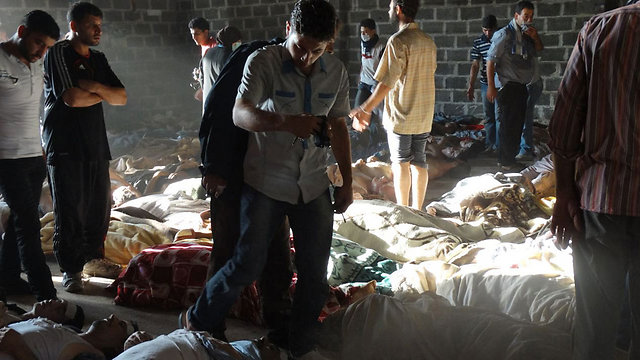 Within half an hour after the attack on Erbin, however, residents had passed on reports of apparent gas attacks nearby.

"Some of them passed the information on the loudspeakers from mosque minarets, saying towns like Ain Tarma and others were claiming chemical strikes." Medics went house to house, he said, breaking down doors to check even homes that were not hit by the shelling to ensure there were no victims of the gas attack. Majid Abu Ali, a doctor treating patients in the eastern suburb of Douma, said at least half of the people he treated were women and children who arrived in his clinic around 3 am. "The injuries correspond with sarin gas," he said in an interview on Skype. "Difficulty breathing, heavy breathing, inability to breathe to the point of suffocation. Slowing of the heart reaching cardiac arrest, constricted pupils, perspiration, convulsions and loss of consciousness to the point of death." By the time the rockets hit near Abu Omar, a doctor in Mouadamiya, he and his medics immediately prepared themselves with masks and plastic gloves. But unlike previous attacks that left only a few dozen hurt or killed, he was taken aback by the numbers. Like many doctors, he said he treated hundreds on Wednesday. Of 120 he reported dead from the shelling, he said 50 were killed by gas. "We didn't know what to do with them all so I started sending some of the injured to wait in the streets," he said, speaking from his clinic by Skype, his voice intermittently drowned out by the sound of artillery still pummeling the area. Activists said the army had launched a fierce offensive, with repeated air and artillery strikes that have not let up since Tuesday night. "I've had dozens of the rescuers hurt today, and nine killed. At first they were being affected by the gas," Dr. Abu Omar said. "But now they're dying in the regular shelling. The bombs just won't stop."