Syrian Prime Minister Wael al-Halqi said Wednesday his country would become a "graveyard of the invaders" in case of foreign military intervention and accused the West of inventing pretexts to attack.

Syria will "surprise the aggressors as it surprised them in" the 1973 Yom Kippur War, when Arab forces caught Israel off guard, and become "the graveyard of the invaders," he said.

Halqi said the "colonialist threats" of Western powers "do not terrorize us because of the will and determination of the Syrian people, who will not accept being humiliated."

Referring to allegations of chemical weapons use by President Bashar Assad's forces, the Syrian PM charged that "Western countries, starting with the United States, are inventing fake scenarios and fictitious alibis to intervene militarily in Syria." A number of senior American officials were quoted by US media outlets as saying that an attack on Syria may be launched as early as Thursday. Deputy Foreign Minister Faisal Muqdad, meanwhile, said the West had pushed anti-regime rebels to use poison gas, while blaming it on the government, as a pretext for a Western intervention. "The terrorist groups used sarin gas in several areas of the country... with the encouragement of the Americans, the British and French," he told reporters. "The encouragement of these Western countries must stop because by defending these terrorists... these groups will soon turn their chemical arms against the people of Europe."

Muqdad was speaking after a meeting with UN disarmament envoy Angela Kane, the leader of a team of UN weapons inspectors that has been in Syria since August 18.

Syria's ambassador to the United Nations, Bashar al-Jaafari, told the state news agency SANA that rebels had used chemical arms to provoke a Western intervention. Meanwhile, Sky News Arabia quoted a high-ranking Jordanian source as saying that special military forces are currently positioned on the Jordanian-Syrian border and stand ready to enter "some sensitive sites" in Syria with the aim of securing chemical weapons stockpiles, 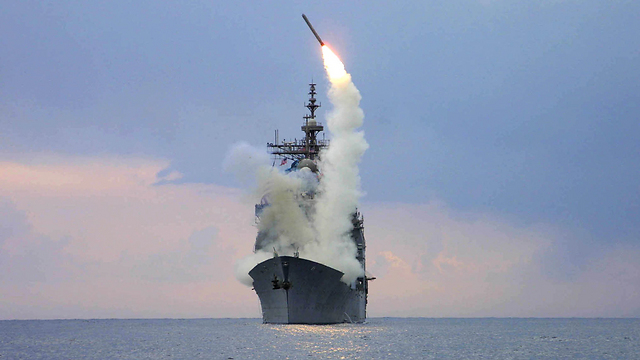 "These forces have been trained in terrains that are similar to Syria's geography to guarantee that they would reach their targets with the minimum losses possible," the source, who did not elaborate on the nationalities of the forces, added.

The source said that Jordanian territory will not be a launchpad for any military strike on the Syrian regime, adding that the bombardment will involve rocket launchers, destroyers and warplanes. "Military strikes will also target several positions of the terrorist groups that are operating in Syria," the source revealed. "A buffer zone will be created in southern Syria to accommodate the new numbers of Syrian refugees and Western and Arab fighter jets have been put on alert at the Jordanian-Syrian border as a precaution against any retaliation by the Syrian regime against Jordanian territory," the source added. Jordan has also deployed Patriot anti-missile systems along its border with Syria, the source said, noting that "the Jordanian army has studied several possible scenarios, including the possibility of using northern Jordan's airspace." "Should a buffer zone be created in southern Syria, it will be protected by the military forces deployed on the Jordanian-Syrian border," the source added, revealing that "warplanes and modern anti-missile systems have arrived on the Jordanian border as part of the support offered by the Saudi brothers, in addition to US fighters jets and drones."