Hashemite Kingdom, thirsty for water due to huge influx of Syrian refugees, to get Kinneret water in return for desalinated water from Aqaba plant

Israel and Jordan are holding advanced negotiations over water exchanges between the two sides, Ynet has learned.

According to the developing outline, a water desalination plant will be built in Aqaba, and Jordan will supply Israel with the product to be used in the Negev.

In return, Israel will supply Jordan with water from the Kinneret to be used in the north of the Hashemite Kingdom. 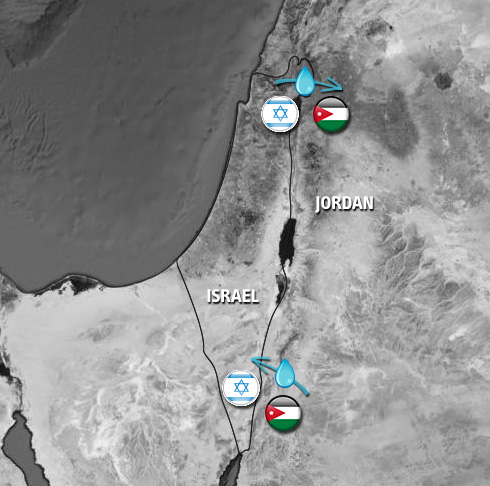 Salinated water from Jordan in exchange for Kinneret water from Israel

This outline is meant to save Jordanians the transport costs involved in moving water from southern to northern Jordan.

The sides are attempting to create an alternative for the outline agreed upon in the 1994 peace accords, according to which Israel supplies Jordan with 50 million cubic meters of water annually.

Jordan's Prime Minister Abdullah a-Nasour confirmed this week that the kingdom will indeed trade water with Israel. In a press conference in Amman, the prime minister said "we need water in the north, and Israel wants water in the south."

A few weeks ago the Jordanian Water and Agriculture Minister Hazem Nasser revealed that Jordan has adopted a new plan to desalinate water from the Red Sea.

According to the minister, Jordan will issue a tender by the end of 2013 for the construction of the plant, and the laying of a pipe between it and the Dead Sea, spilling there whatever water is left.

The main obstacle facing the project is financial. The World Bank is ready to grant Jordan five billion dollars, but conditions it on cutting subsidies, which the kingdom has yet to comply with.

In addition, Jordan will have to come up with $2.6 billion on its own, which does not seem likely at the moment.

The project has also come under fire from environmental organizations, concerned with the possible damage to the Dead Sea should left-over water be funneled to it from the Aqaba plant.

In recent months Israel raised the amount of water it pipes to Jordan in order to help its neighbor handle the severe water shortage it is facing, also caused by the new demand posed by the gargantuan influx of Syrian refugees into the country.

The number of Syrians fleeing into Jordan from the civil war in their country has crossed the half million mark in the sparsely populated country of 6.3 million.

"Creative ideas for the cooperation between Israel and Jordan in the field of water should be welcomed," said Gideon Bromberg, CEO of the Friends of Earth organization, which work to tighten the ties between the two countries in environmental and water issues.

"One of the immediate benefits of the project for Israel is a future solution for water supply to Eilat and the Arava area.

"In light of the city's expected growth and shortage of drinking water, the project exempts Israel from the need to build its own desalination plant in Eilat or connect to the National Water Carrier, steps which would carry much higher costs.

"Another immediate benefit is the improving of ties between Israel and Jordan, which creates a mutual dependency on regional stability for both sides."

Energy and Water Minister Silvan Shalom's office told Ynet: "The minister is actively pushing this project forward. The matter is yet to be finalized, but it's in its advanced stages."

The minister's office confirmed that a larger amount of water than agreed upon in the peace accords was transferred to Jordan, and said that "we have a chance to help to everyone's benefit."