The US Navy has deployed a fifth destroyer to the eastern Mediterranean, a defense official told AFP on Thursday, as expectations grow of an imminent strike on Syria.

The USS Stout, a guided missile destroyer, is "in the Mediterranean, heading and moving east" to relieve the USS Mahan, said the official, who said both ships might remain in place for the time being.

Earlier Thursday, the Interfax news agency said Russia is sending two warships to the eastern Mediterranean. The agency quoted a source in the armed forces' general staff as saying a missile cruiser and an anti-submarine ship would arrive in the coming days because of the "well-known situation" - a clear reference to the conflict in Syria.

The navy later denied the deployment was linked to events in Syria and said it was part of a long-planned rotation of its ships in the Mediterranean. It did not say what kind of vessels, or how many, were on their way to the region. 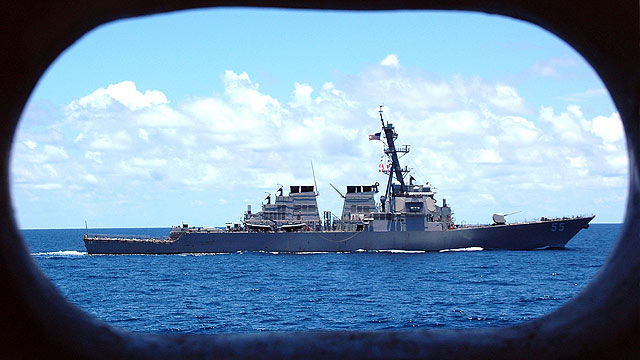 Meanwhile, British Prime Minister David Cameron said on Thursday it was "unthinkable" that Britain would launch military action against Syria to punish and deter it from chemical weapons use if there was strong opposition at the United Nations Security Council.

"It would be unthinkable to proceed if there was overwhelming opposition in the (UN) Security Council," Cameron told parliament, when asked if Britain would press ahead with action if there was strong opposition at the United Nations.

Russian President Vladimir Putin and German Chancellor Angela Merkel agreed Thursday on the need for the UN Security Council to study a report by UN experts on the alleged chemical attack outside Damascus, the Kremlin said.

"Both sides proceed from the fact that active work will be continued within the framework of the United Nations and other formats on issues of a political and diplomatic settlement of the current situation," the Kremlin said in a statement. "In particular, it is important that the Security Council examines a report by UN inspectors about possible facts of the use of chemical weapons in Syria," it added. In Berlin, German government spokesman Steffen Seibert confirmed the telephone conversation, saying Putin and Merkel agreed that the "conflict can only be resolved politically". The German chancellor "emphasized that the inhumane poison gas attack against Syrian civilians requires an international reaction," Seibert added. The conversation comes as Russia is expected to veto any attempts to win UN Security Council backing for Western-led military action against the regime of President Bashar Assad over last week's attack, which activists say killed hundreds of people. The United States, Britain and France have said Assad's regime was to blame for the alleged chemical attack but Russia has suggested it was the rebels seeking to discredit the regime. French President Francois Hollande also said on Thursday that Syria needed a political solution, but that could only happen if the international community could halt killings like last week's chemical attack and better support the opposition. Hollande sounded a more cautious note than earlier in the week, when he said France stood ready to punish those behind the apparent poison gas attack that killed hundreds of civilians in Damascus. He indicated that France was looking to Gulf Arab countries to step up their military support to the opposition to President Assad, after Paris said this week it would do so. "Everything must be done for a political solution but it will only happen if the coalition is able to appear as an alternative with the necessary force, notably from its army," Hollande told reporters after meeting the head of the opposition Syrian National Coalition, Ahmed Jarba. "We will only manage this if the international community can put a temporary stop to this escalation in violence, of which the chemical attack is just one example," Hollande said.