In special address to nation, US president says he'll discuss Russian offer to neutralize Syria's chemical weapons with Putin, but asked Americans to endorse strike if initiative fails. 'If we fail to act, the Assad regime will see no reason to stop using chemical weapons,' he says

US President Barack Obama vowed on Tuesday to explore a diplomatic initiative from Russia to neutralize Syria's chemical weapons but voiced skepticism about it and urged war-weary Americans to support his threat to use military force.

Obama said a Russian offer to push Syrian President Bashar Assad to place chemical weapons under international control opened up the possibility of halting the limited military strike that he is considering against Syria.

Speaking from the White House's East Room, Obama said US he would discuss the diplomatic option with Russian President Vladimir Putin, with whom he has had rocky relations.

Obama asked the US Senate to put off a vote on his request for an authorization of military force to let the diplomacy play out. It has been far from certain whether Obama would win a vote in the restive Congress on the Syrian issue. A negative outcome would be a huge embarrassment for the president.

Obama set no deadlines for diplomacy to run its course, but said any deal with Assad would require verification that the Syrian president keeps his word.

"It's too early to tell whether this offer will succeed. And any agreement must verify that the Assad regime keeps its commitments. But this initiative has the potential to remove the threat of chemical weapons without the use of force, particularly because Russia is one of Assad's strongest allies."

The Russian offer had the effect of extending Obama a lifeline as he fought an uphill battle to persuade Congress and Americans to support a go-it-alone attack on Syria.

Obama has faced stiff resistance in Congress to any military action and lawmakers on both sides of the issue were quick to seize on the Russian proposal as a possible way out, despite doubts about its eventual success.

Obama used much of his speech to lay out the case against Syria, saying there was plenty of evidence showing that the Syrian government was behind an Aug. 21 chemical weapons attack that killed 1,429 people, including more than 400 children. 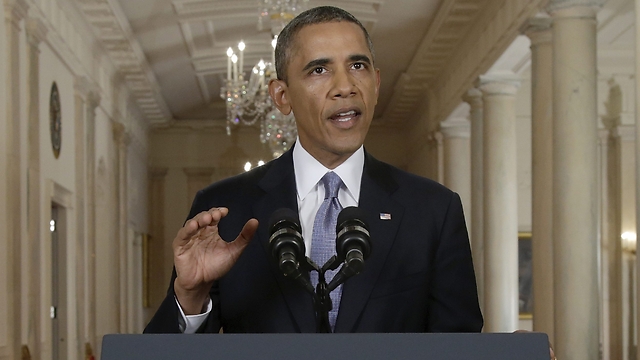 He argued that Syria should face consequences for using such weapons because much of the world has adopted a ban on chemical weapons. If the civilized world does nothing to respond, it will only embolden US adversaries and increase the chances US troops might one day face these weapons on the battlefield, he argued.

While stressing that "America is not the world's policeman" and that it is beyond the US's means "to right every wrong", he claimed that "when, with modest effort and risk, we can stop children from being gassed to death and thereby make our own children safer over the long run, I believe we should act.

Making his case for a military response in Syria, Obama said that "If we fail to act, the Assad regime will see no reason to stop using chemical weapons. As the ban against chemical weapons erodes, other tyrants will have no reason to think twice about acquiring poison gas and using them. Over time our troops would again face the prospect of chemical warfare on the battlefield, and it could be easier for terrorist organizations to obtain these weapons and to use them to attack civilians.

"If fighting spills beyond Syria's borders, these weapons could threaten allies like Turkey, Jordan and Israel."

Obama argued that it is in the national security interests of the United States to respond to the Assad regime's use of chemical weapons through a targeted military strike, but that as president of world's oldest constitutional democracy, it was right to take the debate to Congress. 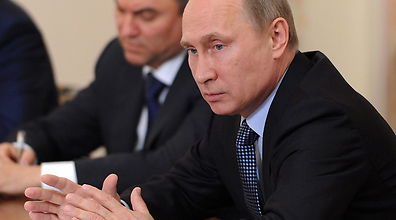 Addressing American concerns over involvement in a protracted war, Obama said, "I will not put American boots on the ground in Syria. I will not pursue an open-ended action like Iraq or Afghanistan. I will not pursue a prolonged air campaign like Libya or Kosovo. This would be a targeted strike to achieve a clear objective: deterring the use of chemical weapons and degrading Assad's capabilities."

"Others have asked whether it's worth acting if we don't take out Assad. As some members of Congress have said, there's no point in simply doing a pinprick strike in Syria. Let me make something clear: The United States military doesn't do pinpricks.

Even a limited strike will send a message to Assad that no other nation can deliver. I don't think we should remove another dictator with force. We learned from Iraq that doing so makes us responsible for all that comes next. But a targeted strike can make Assad or any other dictator think twice before using chemical weapons."

'Israel can defend itself'

Discussing concerns of Syrian retaliation, Obama said, "We don't dismiss any threats, but the Assad regime does not have the ability to seriously threaten our military. Neither Assad nor his allies have any interest in escalation that would lead to his demise. And our ally Israel can defend itself with overwhelming force, as well as the unshakable support of the United States of America."

In a sign of the shifting political mood in Washington toward diplomacy, a group of Republican and Democratic US senators began drafting a modified resolution on the use of military force that would give the United Nations time to take control of Syria's chemical weapons.

The Russian diplomatic initiative, which emerged after off-the-cuff remarks by Kerry on Monday alluding to such a deal, marked a sudden reversal following weeks in which the West seemed headed toward intervening into Syria's 2-1/2-year-old civil war.

Obama spent much of the speech outlining why he feels the United States has a global obligation to respond to the Syrian chemical weapons onslaught. He portrayed the Aug. 21 attack in graphic terms. 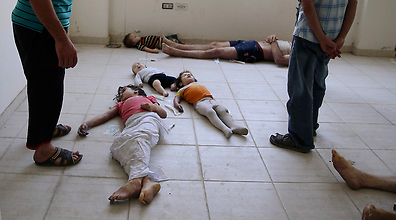 "The images from this massacre are sickening: men, women, children lying in rows, killed by poison gas; others foaming at the mouth, gasping for breath; a father clutching his dead children, imploring them to get up and walk," he said.

The overwhelming message from Obama was that he would like to avoid taking military action, a reflection of his own personal view toward diplomacy and a response to polls showing Americans are opposed.

Initial reaction to the speech from some undecided lawmakers showed skepticism about military intervention.

"America should bring the world together to condemn and penalize Syria for this action. Such an effort, however, is best pursued through international negotiation and diplomacy," Democratic Senator Jeff Merkley of Oregon said.