Analysis: US-Russian deal to eliminate Assad's chemical weapons obviously positive, but its implementation will not be easy

The proposal to eliminate Syria's chemical weapons is favorable from the US and Israeli perspective, assuming of course that the agreement will be implemented to the letter and in accordance with the timetable that has been set for it – eight to 10 weeks. Russia and the US agreed to prioritize the near immediate neutralization of Assad's ability to use chemical weapons, and this is a very positive development for Israel.

Another positive aspect of the agreement is that if Syria fails to comply with it, it would face consequences under Chapter 7 of the UN Charter, the part that covers sanctions and military action. This clause is crucial as far as the US concerned because it wants to keep up the pressure on Syria and for the time being it is keeping its destroyers and aerial forces in the Middle East.
Syrian Dictator
Murder will only continue
Hagai Segal
Op-ed: Assad proved a long time ago that in addition to being a mass murderer, he is also a compulsive liar
Murder will only continue
It is clear that by exercising its veto power in the UN, Russia can foil the implementation of this clause, but its inclusion in the agreement sends a clear signal to Assad that he had better follow orders. The two superpowers have tasked inspectors from the Organization for the Prohibition of Chemical Weapons (OPCW) with locating, neutralizing and - if possible – immediately destroying the chemical weapons and the apparatus used to fill warheads and bombs with chemical agents. OPCW was established in 1997 and is based in The Hague. Syria is one of 189 countries that have signed its treaty. The agreement between the US and Russia determines that Syria must grant the organization's inspectors unfettered access to its chemical weapons stockpiles. 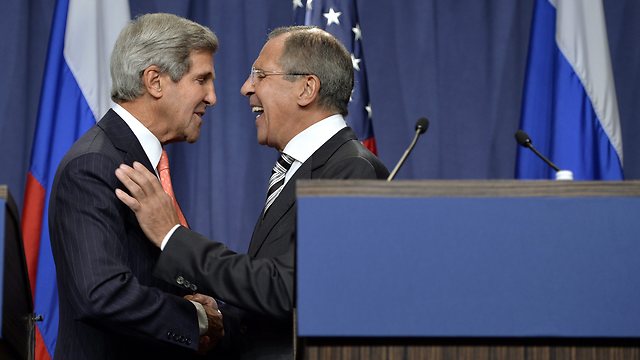 Under the pact, a number of measures will be taken that will prevent the use of Syria's chemical weapons by the Assad regime, Hezbollah (Assad may try to transfer some of his chemical weapons to the Lebanese Shiite group) and the jihadist organizations fighting against Assad's forces.

OPCW is expected to set up a team that will include experts from the five permanent members of the UN Security Council. Prior to the arrival of the inspectors, Syria must provide a "comprehensive listing," including names, types, and quantities of its chemical weapons agents, types of munitions, and location and form of storage, production, and research and development facilities. Once in Syria, the inspectors are supposed to verify the Syrian report and make sure the chemical weapons sites are secure. Later, the process of destroying some of the WMDs will begin. The production and mixing/filling equipment is scheduled to be destroyed by November. The next phase will see the US and Russia try to move the chemical stockpiles and empty warheads out of Syria (probably to Russia, which has a lot of experience in such projects) for the purpose of destroying them. At the same time, chemical weapons that cannot be moved out of Syria will be destroyed.

The most important clause of the agreement states that the US and Russia have decided that to achieve accountability for their chemical weapons, the Syrians "must provide the OPCW, the UN, and other supporting personnel with the immediate and unfettered right to inspect any and all sites in Syria." Meaning, the inspectors will be able to conduct surprise visits to the sites.

All this is very promising, but it is safe to assume that the tight schedule will be extended and that the inspectors will encounter difficulties from both the Assad regime and the rebels. They will constantly be in danger and will have to be protected by a special force. This requires a lot of preparations and funding.

The agreement was worded in such a way that it does not accuse the Assad regime of using chemical weapons. On this issue, the Russians had the upper hand. They also succeeded in subjecting the agreement and its implementation to the decisions of the Security Council and UN General Assembly.

This condition will allow Russia and China to prevent a military operation against Syria and even the imposition of sanctions – should the Arab country fail to comply with the deal.

What appears on paper looks good, but the real test lies in the implementation of the agreement, and in this regard we are surely in for many months of ups and downs in which the US will most likely have to renew its threat of force and Russia will try to give Assad a chance to get out of the mess he has gotten himself into. The story is not over, and it is too early to determine who won and who was defeated.