In interview with ABC, Zarif says US 'allowing terrorists to kill innocent Iranian scientists'; claims his country believes nuclear weapons are 'detrimental' to its security

WASHINGTON – A day before Prime Minister Benjamin Netanyahu's scheduled address before the UN General Assembly's annual meeting in New York, Iranian Foreign Minister Javad Zarif attacked Israel, saying it "cannot kill all of our scientists. They have unfortunately assassinated some of them and nobody has raised an eyebrow about it, which is a source of great concern for us that the world.

"The United States which is supposed to be against terrorism is allowing terrorists to kill innocent Iranian scientists," Zarif said in an interview with ABC's "This Week with George Stephanopoulos."

"We don't want nuclear weapons. We believe nuclear weapons are detrimental to our security," he told ABC, and then continued his attack on the Jewish state, saying "Israel has 200 nuclear warheads. Israel is the source of insecurity in our region. Israel is the source of aggression and violation of human rights of the Palestinian people. It should not have the audacity to continue to lie to the American people and to the world by - and mislead everybody." 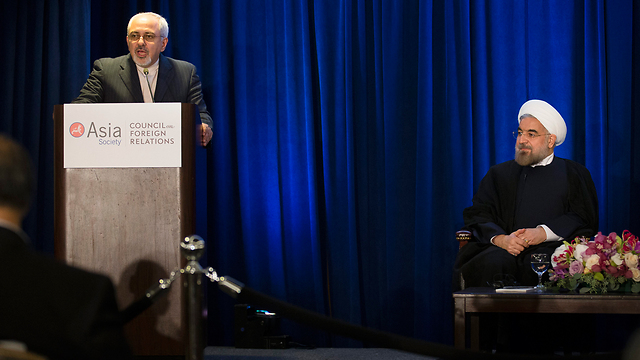 The interview followed a week-long "charm offensive" by Iranian President Hassan Rohani, who promised the US President Barack Obama at the General Assembly meeting that the two countries can "settle their differences." Obama and Rohani also held a historic 15-minute phone conversation, the first between leaders of the two countries since the Islamic Revolution of 1979. In the interview with ABC, Zarif said Iran was prepared to negotiate with the US on the nuclear issue, but added that Washington must "dismantle its illegal sanctions against Iran that are targeting ordinary Iranians. "It is impossible to open a letter of credit from a bank to buy medicine for Iranian patients because there (have) been, in fact, blind sanctions against banks dealing with Iran. There has been a lot of arm twisting by the United States, by - not by the entire government, by certain elements within the US government which have tried to put pressure on ordinary Iranian people," he said. Zarif said that while Iran is willing to negotiate with the West, it has a right to enrich uranium.