Obama to Rohani: May God be with you

"Have a nice day" - this is how Iranian President Hassan Rohani concluded his phone conversation with US President Barack Obama, the first direct contact between leaders of the two nations in over three decades.

A message on Rohani's Twitter page, which has since been deleted, stated that Obama answered in Farsi by saying "khodahafez" to indicate goodbye, whose literal meaning is "may God be with you."

The tweet was one of several Rohani posted after the historic phone conversation. He noted that Obama had phoned him and told him he was positive that relations between Iran and the US would have great effect on the region.

Some tweets that were later removed and replaced with a more general statement, noted that Obama had wished the Iranian president a safe trip and had apologized for New York traffic. 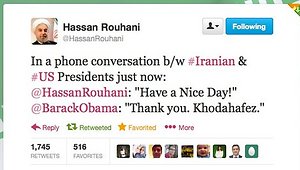 However, a US senior official stressed that the conversation was held on Rohani's initiative.

Meanwhile, the New York Times reported of Iranians' response to the conversation. “Wow, this is fantastic,” said Armin Kay, an engineer reacting to the news. “The most important thing is that Obama took the initiative. This will go down really well with our leadership.”

Amir Mohebbian, a political adviser close to Iran’s supreme leader, Ayatollah Ali Khamenei, said: “After the positive meeting between the foreign ministers of Iran and the United States on Thursday, we could see this coming,” referring to Foreign Minister Mohammad Javad Zarif and Secretary of State John Kerry. “This was a polite farewell, a thank you for all the positivity from Iran.”

If talks on Iran’s nuclear program next month go well, he said, “we could witness a meeting after that.”

The paper quoted another analyst close to Rohani who praised the phone call by Obama as “the best thing he could have done.”

The analyst, Nader Karimi Joni, who works as a journalist and has been jailed for opposing the interests of hard-liners, said the call was a “verbal farewell for a V.I.P. guest, similar to seeing Mr. Rohani off personally.”

According to the report, some Iranians said the immediate practical impact of the phone call could be a surge in the value of Iran’s currency, the rial, which has weakened to historic lows against the dollar in recent months because of the accumulated economic sanctions on Iran, imposed by the United States and European Union in response to the nuclear standoff.