Palestinian shot dead after ramming tractor into IDF base

Soldiers securing army base north of J'lem kill Palestinian who crashes through gate with tractor. Terrorist's brother tried to run over police officers with tractor in 2009

A Palestinian was shot dead Thursday evening after he rammed a tractor through the main gate of an army base located north of Jerusalem.

IDF soldiers securing the A-Ram army base, near Ramallah, shot the Palestinian, who was initially treated by military physicians before being pronounced dead. The army said the soldiers felt they were in a life-threatening situation and opened fire on the tractor.

An IDF soldier was lightly injured when an object hit him during the incident.

Palestinian sources identified the terrorist who breached the IDF base as Younis Radeideh. The sources told Ynet the terrorist's brother, also attempted to carry out a terrorist attack with a tractor, in 2009. The security established received information indicating that the Palestinian who broke into the IDF base is in fact the brother of the terrorist from 2009, but the identification process has yet to be completed.

The brother, Mir'i Radeideh, tried to run over two police officers in Jerusalem. The two officers were mildly injured, and Radeideh was shot by a cab driver and later died of his wounds. 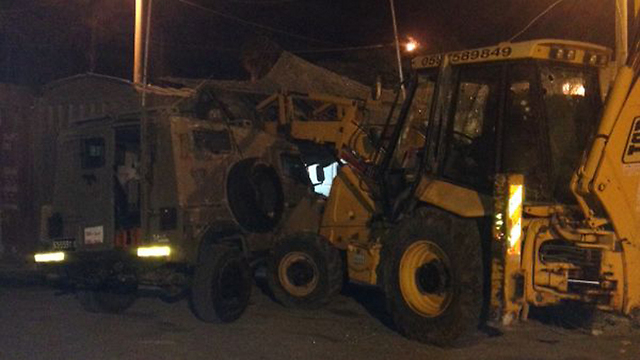 The tractor driven by the terrorist (Photo: IDF Spokesperson's Unit)

Younis' family resides in Al-Ram, north of Jerusalem, but it is originally from the Palestinian village located east of Bethlehem. He was apparently driving a tractor that belonged to his family. An initial investigation revealed that the Palestinian managed to enter the base and caused damage to property. Before being shot he tried to lift a parked IDF jeep with the tractor. Large army forces were alerted to the scene, and the IDF said it was treating the incident as an attempted terror attack.

In December an IDF soldier stationed in the same base sustained mild wounds when two Palestinians who infiltrated the base attacked him and snatched his rifle. An investigation found that the Palestinians took advantage of the heavy rain to infiltrate the base through the security fence surrounding it.

Last week Colonel (res.) Sariya Ofer was murdered outside his home in the Jordan Valley community of Brosh Habika. Security forces suspect the murder was nationalistically-motivated, but are not ruling out other possibilities.