After anti-tank missiles take out Islamic Jihad operative Mohammed Assi, who was hiding in cave near Bilin, army warns of 'terror atmosphere' in West Bank

Nearly a year after the bombing of a Tel Aviv bus during Operation Pillar of Defense left 29 people injured, an anti-tank missile killed one of the terrorists who planned the attack. An operation launched Tuesday morning to arrest terror suspects in the Palestinian village of Naima, near Bilin in the West Bank, ended in the death of Islamic Jihad operative Mohammed Assi.

The IDF said that Assi had been on the run from IDF forces over the past year. Two of his associates were caught early Friday morning, while he escaped and sought refuge in a nearby cave.

Forces belonging to a special Israel Police unit arrived at the hiding place in the early hours of Tuesday morning. Assi, 28 refused to surrender and opened fire at the forces, which encircled the cave. The forces returned fire, and following a short battle, the terrorist was killed when two LAW missiles were fired in his direction. 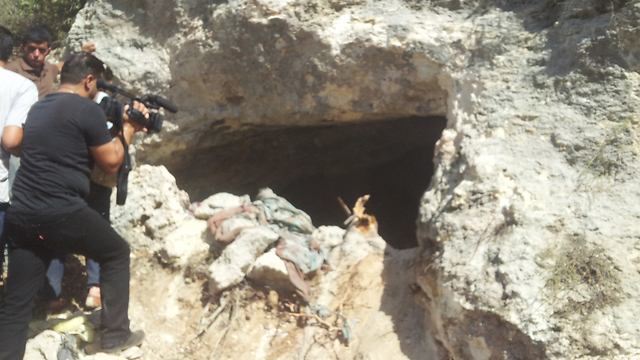 The cave where Assi was hiding

Blood, bullet casings and cans of food were found at the scene. Following the incident, clashes erupted between young Palestinians and security forces. The terrorists' father also arrived at the scene and said he had not seen his son in more than a year.

work" and that the forces were able to reach the terrorist "in a very professional manner."

Another officer said the terrorist "threatened to attack our forces for months." Addressing the series of violent incidents in the West Bank over the past few weeks, he said: "Things in the territories are changing. We are seeing a negative trend over the past few weeks. The common element of the recent events indicates that there is an atmosphere of terror attacks. If someone thought of carrying out a terror attack, the current atmosphere allows him to do so."

Defense Minister Moshe Ya'alon also addressed the escalation of violence in the West Bank. "The atmosphere in the territories is bringing this wave, and we will act against it with resolve," he said during a visit to Hebron. "However, there are no signs of a popular uprising or a third intifada."