Two months after first wave of prisoner releases – on October 27 – the State of Israel is expected to release a second wave of Palestinian prisoners. As part of the preconditions for the resumption of peace negotiations, Israel is slated to release 104 prisoners who have been imprisoned since prior to the Oslo Accords, most of whom were sentenced to life and considered major terror participants, with blood on their hands.

On August 13, 2013, 26 prisoners were already released. With this second phase, 32 additional prisoners will be given their freedom. The government has yet to okay the deal, but it is expected to pass. This time as well, prisoners considered major terror participants will be released to Gaza. This is regardless of the fact that Israel has had bitter experience with the release of prisoners in general, especially those headed for Gaza.

One of the heroes of the Gaza terror movement is Ayman Sharouna, who was sentenced to 38 years for involvement in deadly terror attacks in Beersheba. He was released in the Shalit deal, and arrested again in 2012 for breaking release conditions. Following a 261 day hunger strike, Israel gave in and released Shraonah yet again in March, this time to the West Bank for the next 10 years. He has since become a central figure in a special unit established by Hamas’ military wing to coordinate terror attacks in the West Bank. The unit, made up of released Palestinian prisoners, is responsible for some of the deadliest attacks carried out in the region. 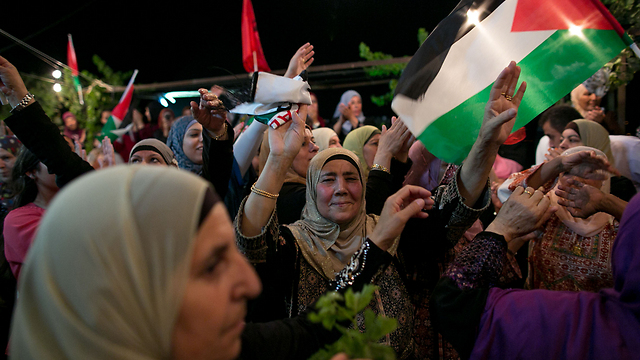 While Gaza is home to those who coordinate and carry out the attacks, the brains and funding come from Turkey. Heading up terror activity for Hamas in the West Bank and Gaza is another released prisoner – Saleh Al Arouri. Among the founders of the military wing of the Hamas, Arouri did several stints in Israeli jails, before being released in 2010.

Upon his release, he was obligated to leave the area for three years, so he moved with Hamas’ command (which had left Damascus) to Turkey. Today, he operates out of Turkey, with the backing of the Turkish government.

It was within this backdrop of terror operatives in Gaza, the West Bank and Turkey built upon a population of released prosoners – that Hamas Prime Minister Ismail Haniyeh called this week – on the one-year anniversary of the Shalit deal – for a third intifada in the West Bank. In the past month, Saleh Al Arouri and those under him in Gaza and the West Bank, made a concerted effort to incite the area, with the intention of derailing the restarted peace talks, to weaken Palestinan Authority President Mahmoud Abbas, and to hurt Israel. The center of rioting has been the Al-Aqsa Mosque, where most of the past month’s ‘spontaneous’ demonstrations have taken place. Hamas presents itself under the guise of an innocent Islamic organization, made up of mostly Jerusalem residents, which serves as a patron of the intifada. In cooperation with the northern branch of the Islamic Movement, the group – which considers it its responsibility to protect Islamic interests at the Temple Mount – called for “days of rage.” The result was more days of violence at the mount. According to security sources, in addition to the attempt of inciting the Palestinian street, there has been a significant increase in shooting incidents and throwing of Molotov cocktails at Israelis in the West Bank. This included five terror attacks which left three Israelis dead over the past month. And while security sources do not cite one specific individual as being behind the increase, the statistics are clear – there has been an increase in general violence and terror activity. Released prisoners have had their hands in this. At the moment, as Israel is about to release dozens of former major players in terror activity, it should consider that a portion, even if they are not young, will return to the armed Palestinian fight, predominantly those who will go to Gaza. These prisoners will be returning to a more explosive situation than earlier in the year.