Five members of a Palestinian family were hurt Thursday after their house in the village of Sinjil was torched. Graffiti reading "Regards from Eden revenge" was sprayed on the house door. The five were taken to hospital suffering from smoke inhalation. Damage was caused to the property.

The arson comes a day after soldier Eden Atias, 19, was stabbed to death on a bus in Afula by a Palestinian teen who resided in Israel illegally.

Security forces have launched an investigation into the arson. An army official said, "The IDF considers with great severity events which divert the security forces' attention from their main task of fighting terror and that destabilize the area." 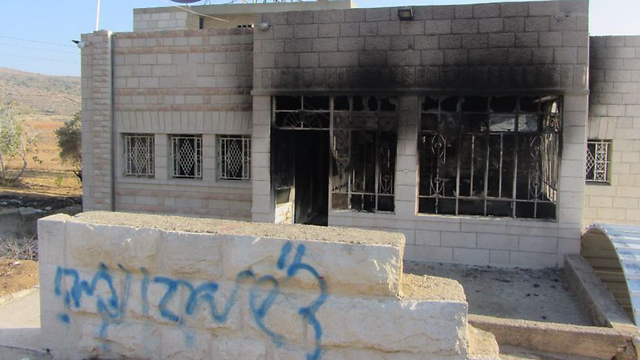 Last month, it was reported that the Jerusalem District Police Central Unit arrested 14 yeshiva students from Jerusalem, aged 13-16 on suspicion of operating as an organized group that attacked Arabs, vandalized vehicles, spray-painted hate graffiti and threw stones at vehicles with Arab drivers.

In July, police arrested an 11-year-old boy after he was caught vandalizing Arab cars in the Shaar Binyamin area, north of Ramallah. The boy sprayed the slogans "Price Tag" and "Death to Arabs" and slashed one of the car's tires.