The Halacha (Jewish Law) strictly forbids delaying the immersion, and so the Taharat Habait organization operated a special patrol jeep which went from house to house upon request and drove women to the nearest mikveh and back.

The jeep made its way through the snow on Thursday and Saturday evening in Jerusalem and nearby communities in order to allow women to observe the monthly mitzvah. 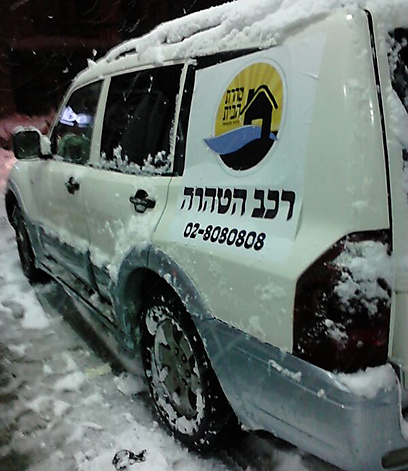 "The organization's top priority is raising awareness to the importance of the family purity mitzvah," explained the organization's chairman, Rabbi Yehezkel Mutzafi. "We see it fit to operate even with such serious conditions like rainy weather and heavy snow, so that as many women as possible adhere to purity laws and manage to reach the mikveh in the easiest and most convenient way."

Religious men encountered difficulties as well, for example in carrying out trivial actions like praying with a quorum. In the past few days, and especially on Shabbat, many in have found it difficult to walk to synagogue in the snowed in areas. Some prayed in units at home, while others managed to gather nine other worshippers for an improvised quorum at their building's lobby or basement.

"We prayed in the staircase in freezing cold and wetness, but considering what was going on outside – those were the most convenient conditions," said Uriah, a Jerusalem resident. "As long as it's a one-time thing, it's definitely an experience. But I don't think that those living in the adjacent streets, which were cut off from power supply the entire Shabbat, would agree with this statement." Another issue involved the eruv – a ritual enclosure that permits Jews to carry certain objects outside their own homes on Shabbat. Fears that the stormy weather had caused tears in the eruv wires surrounding every city of neighborhood disrupted the religious daily routine. Many avoided carrying objects outside their homes, in the "public domain," throughout Shabbat. Rabbis and representatives of the religious councils across the country raced against time on Friday to ensure that the wires were undamaged or to repair them before the start of Shabbat, but not everyone managed to get the job done in time. In cities and communities where the eruv was declared to be intact before the start of Shabbat, there were concerns that it was damaged hours later, at the height of the storm. As a result, people who wanted to leave their homes during the day of rest could not carry their keys or push a stroller, while those invited to Shabbat meals were unable to bring along the food they prepared, causing many to just stay at home. "We wanted snow like they have abroad, and we got it all the way," said Shai, a Jerusalem resident. "There is no eruv in Switzerland either."